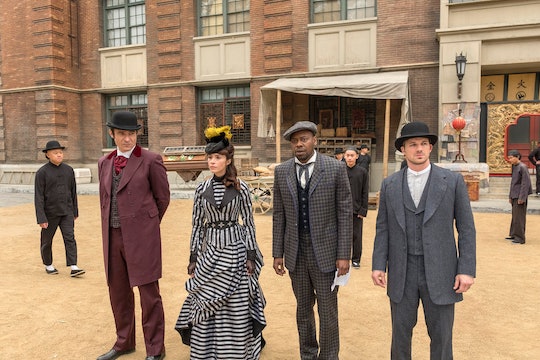 Fans Are Pushing For A 'Timeless' Movie

As the TV landscape gets more vast and diverse, the competition for viewership is getting more intense. This could be why shows like Lucifer, Brooklyn Nine-Nine, and Timeless were canceled by their networks, despite having their own loyal cult followings. Lucifer and Brooklyn Nine-Nine have found new homes for next fall, but despite the tireless and relentless push of it’s fans, Timeless has yet to be picked up. Amid rumors of a possible film, Timeless fans are still hanging on to hope. So, will there be a Timeless movie? It’s a definite possibility.

This isn’t the first rodeo for Timeless fans, as the series was cancelled and then saved by vocal fans in 2017 after it’s first season. After Season 2 finished airing this spring, NBC mulled over the renewal of the series, so fans took to the internet to save Timeless once again. This time around, NBC confirmed the cancellation of the show, but is in negotiations with the creators about a two-hour movie that would bring closure to the series and its fans. In a series of tweets, Eric Kripke, the show’s co-creator, revealed that because there’s no official word on the movie, it’s up to the fans to keep pushing. On tweet read, "Gutted by this, guys, I know you are too. Behind the scenes, Sony has been trying hard to set it up elsewhere, but no luck so far. I think this 2 hour movie is our best shot. We're ready to make it if [NBC] really wants it. Let 'em know how you feel."

On Twitter, fans have been venting their frustrations with NBC and putting their hopes in big streamers including Amazon Studios, Netflix, and Hulu to pick up the series. The #SaveTimeless and #RenewTimeless hashtags have been trending for weeks, and the Timeless writers have come on board by rewarding loyal fans with clips of deleted scenes and script pages. Some celebrity fans have joined the fight as well, including Mark Hamill, Leslie Jones, and William Shatner. Die-hard fan Kelly Clarkson is leading the campaign to renew Timeless.

The cast has been pretty vocal and appreciative of the fans and the movement. Abigail Spencer, who plays the show’s lead Lucy Preston, also took to Twitter to help make the movie a reality. She wrote, "Hey guys! If you want the 2 hour movie... make your voices heard and LOUD. We still need you!"

As a person who watches tons of TV, I can tell you that no other show makes me feel like the fate of the world as we know it is at stake, because it puts real situations from American history in jeopardy. By prompting you to imagine the world without the contributions of important figures like Abraham Lincoln, Madam Curie, and Harriet Tubman, Timeless really makes you reflect and appreciate how strong America is today. The beauty of the show is that also helps bring historical perspectives and interest to a younger generation. As an example, one mom noted on Twitter that her daughter did her science project on the Hindenburg disaster because of Timeless.

As of now, fans are still pushing for the series to be renewed as a whole, and have even started tweeting at smaller streamers like Apple TV, Crackle, and Youtube to pick it up. As a huge fan myself, I would rather see a whole new season rather than a two-hour movie, but at the end of the day, I’ll take what I can get.

If you’re a fan of Timeless, and want to save on of the smartest shows on television, you can join the #SaveTimeless movement on Twitter, and help keep the momentum going.