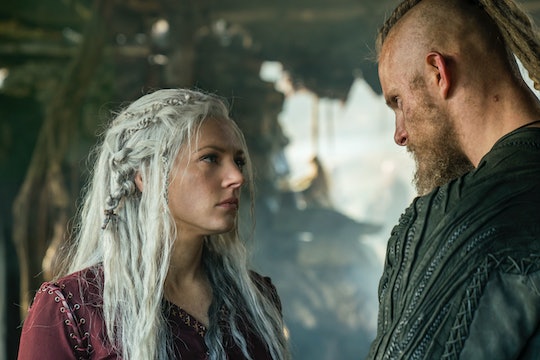 Who would have thought that the History Channel of all networks would come out with a show that would satisfy viewers’ need for family drama, historical reenactments, and bloody battles? It’s like a semi-historically accurate alternative to Game of Thrones. Except in this case there aren't any mythical giants and I’m pretty sure there’s no gratuitous nudity either. But with the second part of Season 5 here, fans are probably already asking, will there be a Vikings Season 6? The good news is that Vikings was renewed for Season 6 before Season 5 had premiered back in 2017. But right now, it's unclear when the next season will make it to air.

According to Variety, filming for Season 6 was set to begin in the fall of 2018 in Ireland, which means that it could premiere sometime in November 2019 if viewers are lucky. Like Seasons 4 and 5, Season 6 will be another hefty 20 episodes, so while it also means that there could be another several months long hiatus in the middle of those 20 episodes, it means a lot more guaranteed story moving forward.

"It has been my pleasure and my privilege to work with History and our partner MGM over five seasons and 69 episodes of Vikings," creator Michael Hirst said in a statement obtained by TV Guide. "Now we are ready to begin production of a 20 episode season six that will deliver a huge and unexpected revelation to our audience. There are many reasons why I love this show, not least for the commitment and creativity of everyone involved in making it, but perhaps even more important is the spirit that drives this production — one of the happiest, most collaborative and most authentic productions I have ever been involved with. And so we sail on."

Since Vikings is based on historical battles that were actually recorded in detail and based on those who fought them, there’s no shortage of content for seasons to come. And History Channel executive vice president of programming Eli Lehrer said in a statement that Hirst "has only scratched the surface of his epic saga." He added that the History Channel is excited about "continuing our partnership with one of the greatest writers in this era of Peak TV and entertaining our viewers with 40 new episodes over the next two seasons."

I’m inclined to believe that this means Vikings will be on the network beyond Season 6 as well, but for right now, it’s been guaranteed a home on History for a 20 episode sixth season. And now that Season 6 will introduce Oleg the Prophet of the Russ Vikings, it opens the door to focus on the historical vikings who lived in parts of what is now known as Russia. While there’s less known about the Russ Vikings than others who’ve been portrayed on the show, it just proves that there’s always going to be something new for Vikings viewers.

The first half of Season 5 saw more of the same battles, drama, and death that the show has become known for and I wouldn’t be surprised if Vikings gets renewed for Season 7 before Season 6 premieres. As it stands, the series premiere had six million viewers and if that isn't an indication of a show meant for success, then I don't know what is. Season 6 will likely premiere sometime around November 2019 and until then, there are 10 more episodes to get totally engrossed in while praying to the Norse gods that your favorite character isn't killed off before the end of Season 5.