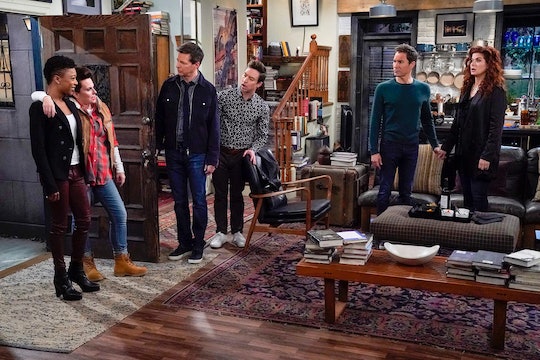 'Will & Grace' Shows No Signs Of Slowing Down Any Time Soon

The season finale of any show brings up one question for all fans, no matter what you're watching. There's a big one on tonight, so people want to know: will there be a Will & Grace Season 11? Revivals are hot right now, but the flame doesn't always burn very long. So I totally understand why you might be worried. But you can turn up the music and dance freely while you're getting dressed for Jack's wedding whenever you watch. I have an answer for you, not just a prediction — and you're going to like it a lot.

NBC has you covered. They announced the series would be returning for a Season 11 way back in March 2018 at PaleyFest. Considering that production of Season 10 hadn't even begun at the time, and that there are plenty of popular shows on the network still awaiting an official decision for this year (like Manifest and This Is Us) this was very kind of them to say the least. Perhaps they just wanted everyone to relax and enjoy the party they knew would be coming Jack's way. He deserves it, Sean Hayes deserves it, and you do too, friend.

The fact that Jack is getting married is both hard for me to believe and feels like it's been a long time coming. The idea of Jack being able to put another person's needs before his own or even compromise makes me scratch my head. (No judgement, Jack. But it really only takes watching one scene of one episode to understand what I mean.)

In real life, Hayes married his husband Scott Icenogle in 2014. "I'm proud to be a gay man in the world today and to express myself in the way that I feel is the most powerful and in the only way I know how, which is making funny Facebook videos with my husband and showing the world that we're as normal as any other couple," Hayes told The Hollywood Reporter in March, ahead of receiving the Stephen F. Kolzak Award for the work he's done throughout his career to support LGBTQ acceptance on Will & Grace and beyond. "It hopefully makes people who are struggling feel even the slightest bit more OK with themselves."

Hayes doesn't just spread a message of acceptance through Jack. Netflix recently ordered Q-Force an animated comedy series about a group of LGBTQ "superspies" that he will executive produce. In case you'd like more context for that, the show's official description reads: “Constantly underestimated by their colleagues, the members of Q-Force have to prove themselves time and again as they embark on extraordinary professional (and personal) adventures.” Michael Schur will also produce the series, written by Gabe Liedman.

But Hayes will not stop at super spies — and why should he? In his recent interview with The Hollywood Reporter he made it clear that it's time for a gay superhero. "They finally had their first woman superhero and big franchise with Wonder Woman, and they finally had their first black lead in a superhero movie in Black Panther, and I'm just waiting for the Pink Panther. And I really, really hope they cast someone who is gay."

Hmmm — I think I know someone who is perfect for the role — and he might be on hiatus before Season 11 of his show starts filming again. Just saying.