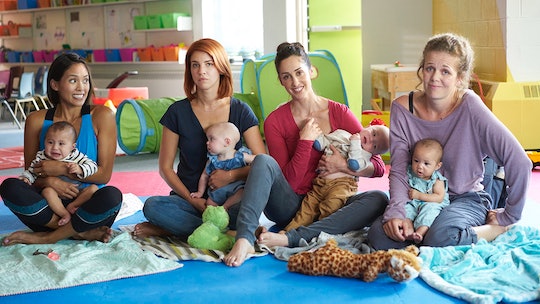 Canadian series Workin' Moms Season 1 debuted on Netflix in February 2019 which meant that moms in the U.S. got the chance to appreciate all the hilarious and relatable mom moments that Canada had been enjoying for years. Now Season 2 of the show premieres on the streamer July 25 — and you're wondering if there will be a Workin' Moms Season 3 on Netflix.

There is no official release date that I could find for Season 3 yet, but it definitely exists because it began airing in Canada on Jan. 10 and the Season 3 finale aired on CBC March 21. If Netflix follows the release schedule it seems to be on with Season 3, that means it should be available to stream in January 2020. But that's just a guess from me, there is no official word yet.

The show has already been renewed for Season 4 in Canada. But according to a tweet from the show's official account, that won't come to Canada until winter 2020. International fans will definitely have to wait longer than that. Cross your fingers for an early 2021 release on Netflix if you already can't get enough of the moms.

The sitcom was created by Catherine Reitman and as soon as I saw that she's in a full bunny suit in her Twitter profile pic I had to know more about her and why she created the show.

Reitman, a mother herself, saw that many of the uglier, more difficult aspects of motherhood were rarely shown on TV. And she wanted to write more realistic stories about being a mother that other moms could relate to — but Reitman wasn't shy about explaining why creating the show was important to her. "I went back to work about six weeks after I gave birth which was crazy early and experienced some pretty bad postpartum depression, but didn't know it at the time," she told Good Morning America. "I would be driving, fantasizing that a car would hit me and put me in the hospital. [I thought] I would be in a coma and get taken care of and not have to worry about my responsibilities."

But she didn't shy away from the challenge of telling such a personal story. Instead, she leaned in to be sure the stories felt overwhelmingly female-driven by curating a mostly female behind-the-scenes team including an all-female writers room and a mostly female production crew. “It was a choice from moment one. There was never any doubt that we wanted to hire women," Reitman told Forbes.

And clearly Reitman's strategy struck a chord with viewers, as the show has maintained its popularity in Canada as well as on Netflix in the United States.

Luckily for those of you who have already finished Season 2, Workin' Moms is not the only sitcom that's getting real (like really real) about motherhood. The Letdown from Australia, for example, isn't afraid to let it all hang out when it comes to life postpartum, and it too is now streaming on Netflix.

Basically what I'm saying is if you need your Messy TV Mom fix while you're waiting for Season 3, you've got options.

More Like This
'Yellowstone' Has An Exciting New Cast Member For Season 5
'Firefly Lane' Is Coming Back To Netflix For One More Final Season
10 Kid-Friendly Halloween Episodes From TV Shows Your Little Vampire Already Loves
'The Proud Family: Louder & Prouder' Is Returning For Season 2 On Disney+