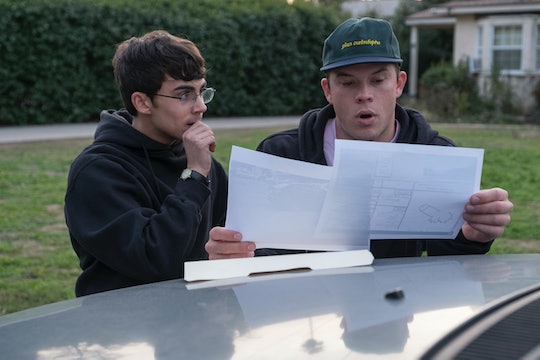 'American Vandal' Season 2 Could Be In The Works

True crime stories are totally in right now. From the popular podcast Serial to Netflix documentaries like Making a Murderer and Amanda Knox, people are just really interested in true crime stories. Therefore, it shouldn't be all that surprising that someone has now made a parody of people's current obsession. Similar to their other documentaries, Netflix's new original series, American Vandal, will follow a case that centers around the male genitalia. Yes, you heard me correctly. While the premise of the show is certainly hilarious, one has to wonder will there be an American Vandal Season 2? It could definitely be a possibility.

Although the series only just started streaming on Sept. 15, critics are already praising it for being a great satire of the true crime drama and are even theorizing the show will become a "hit." If the show is as well received by viewers as it is by critics, a second season could certainly be in the show's future. But first, what exactly is the first season about?

Sticking to the style of a true crime documentary, the eight part series will explore the aftermath of a costly high school prank that left 27 faculty cars vandalized by spray painted images of, you guessed it, dicks. Or, to use proper terminology, "phallic images."

The season will follow an aspiring sophomore documentarian, Peter Maldonado (Tyler Alvarez), as he investigates the crime and the controversial expulsion of senior Dylan Maxwell (Jimmy Tatro) that followed. Peter is sure Dylan is actually innocent, even though Dylan was a known prankster who was known for drawing penis images around school on a regular basis. Still, Dylan maintains his innocence, and Peter is determined to prove it.

Earlier on, it's clear Peter already has some proof. In the trailer, he notes that the ball hairs drawn on Dylan's drawings aren't on the ones that were on the vandalized cars. However, Peter knows he'll need much more evidence, and it looks like he'll be able to get some people to help him prove Dylan's innocence.

Even so, as is seen in the trailer, most people (especially the high school's administration), is sure Dylan is guilty. But could that just be because there's actually some kind of conspiracy going on? Could the administration have framed Dylan for some reason and this act of vandalism is actually much bigger than Peter or Dylan even realize? Who knows. But one thing's for certain — this investigation and Peter's possible discoveries will shake up his school, probably more than the original vandalism did.

Through interviews and investigative reporting, this documentary will get to the truth of who drew the dicks once and for all. Was Dylan really framed or is he just lying about being framed? What is the high school trying to hide? Why is Peter so interested in this anyway? There are a lot of questions that need to be answered.

It's obvious this satire will be just as addicting as the real documentaries it's poking fun at. Although vandalism is a much less serious crime than the murders that most true crime shows follow, the mystery of did Dylan do it or not will definitely keep viewers watching. The added comedic factor will also make this show appealing to people who probably aren't fans of true crime stories, thus bringing in a mixed group of viewers that could really spring this show into popularity.

The series is co-created by Tony Yacenda and Dan Perraulty, who is the mastermind behind the popular YouTube channel, Honest Trailers. Plus, the showrunner, Dan Lagana, is the co-creator of the short lived satire MTV reality series, Zach Stone is Gonna Be Famous. Suffice to say, this show has a great comedic team behind it, so you should definitely give it a chance.