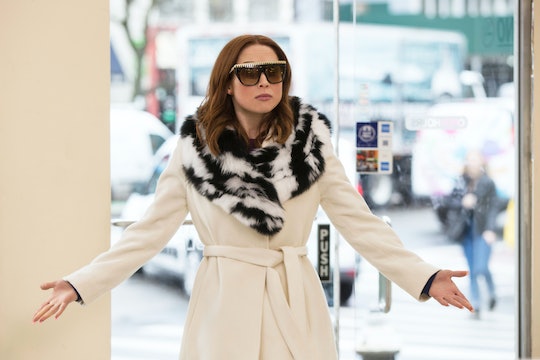 Fans Are Diving Into The Last Season Of 'Unbreakable Kimmy Schmidt'

The last six episodes for Season 4 of Unbreakable Kimmy Schmidt just premiered on Netflix, and the series picks up with Kimmy as she continues to promote her children’s book, The Legends of Greemulax. After devouring the last episodes of the season, fans are wondering what the future holds for Kimmy, Titus, and the rest of their hilarious friends. So, will there be another season of Unbreakable Kimmy Schmidt?

Unfortunately, fans aren’t getting another season of Unbreakable Kimmy Schmidt. Netflix cancelled the series last May, reported Deadline, and gave showrunners enough time to wrap the series up with the second half of Season 4. Initially, showrunners Robert Carlock and TIna Fey envisioned Unbreakable Kimmy Schmidt as a five-season series. In an interview with The Hollywood Reporter, Carlock said that even though the show has four seasons, producers were able to divide it into two parts, which made it feel like two seasons.

"We came into the season not necessarily thinking that way, but in the past few months, we've been thinking [the series] is heading toward its conclusion." he told THR. "We were never quite sure what the life of the show wanted to be. When we split up this fourth season into kind of a fourth and a fifth — just in the boring, most practical way, you could think of them as two short seasons — one wouldn't be coming out until 2019, so it just felt like the right time to pull up stakes since we were kind of pushing ourselves into next year.”

However, this may not be the end of Kimmy’s adventures. Deadline reported that network executives and showrunners are considering making an Unbreakable Kimmy Schmidt movie to tie up loose ends and close out Kimmy’s story properly. Carlock told THR that a deal for a movie is in the works and it could give fans more of a comprehensive ending to Kimmy and her friends’ adventures.. "We now have a shorter runway than we originally thought we would and don't want to overstuff it and rush it," said Carlock. "And there are things that I think would be fun to hold off for kind of a big epic finale in feature form."

Earlier this week, Carlock and Fey spoke to AV Club, and they said that while they want these last six episodes to bring Kimmy’s story to a happy, meaningful end, the possibility of an Unbreakable Kimmy Schmidt movie is still on the table. “We knew we wanted to these final episodes to feel like an ending,” said Carlock. “That doesn’t mean that we don’t have more stories we could possibly tell with these people. Netflix told us to say we’ll keep you posted. That’s the sanctioned answer.”

So, while there are no more seasons of Unbreakable Kimmy Schmidt in the pipeline, there’s a real possibility that viewers will get a movie, spin-off, or reboot in the future. Until then, fans can break open a bottle of Pinot Noir and dive into the last six episodes of the series.