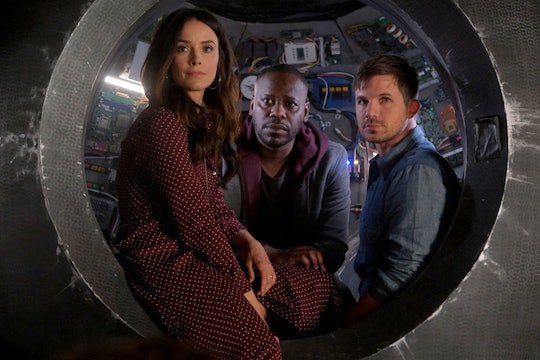 'Timeless' Fans Are Still Fighting To Save The Show's Future

When NBC’s Timeless was cancelled at the end of its second season, fans tirelessly fought to bring the show back. After weeks of negotiations, the network agreed to make a Timeless movie finale in place of a third season. Fans are excited to see their favorite time-traveling team save history once again, but they’re still hoping to secure the show’s future. The #SaveTimeless campaign is still going strong, so will there be another Timeless movie?

As of now, there is no word of any Timeless project beyond the movie finale which premieres on Thursday, Dec. 20 at 8 p.m. ET. However, fans are encouraging viewers to watch and DVR the movie live on NBC so that it earns high Nielsen ratings, enough to possibly get the network to consider another Timeless project. Fans are also trying to create enough social media buzz — through the #SaveTimeless hashtag and retweets — in hopes of compelling other networks to pick up the series.

Alongside the fans, it looks like the show's producers are also keeping the prospects of a subsequent Timeless project alive. In a recent interview with TV Line, showrunner Arika Lisanne Mittman said that the show still has a fighting chance. “With this show, I will never say anything’s impossible,” said Mittman. “I mean, we were the show that was cancelled and brought back three days later. In my life, I’ve never heard of anything like that happening! I wouldn’t count on anything, but I wouldn’t rule us out.”

Executive producer, Shawn Ryan, recently told USA Today that he isn’t ruling out a future timeline for the show. He cited the history of shows like Firefly and Veronica Mars, which reemerged in some form or another despite being cancelled. “I keep terming it the NBC finale, I don’t call it a series finale,” said Ryan. “This is the definitive ending to the NBC journey of the show and it may be the end of the show. I've been down this road twice before, being told the show was dead only to find out the show wasn’t dead.”

For now, fans will get some sense of closure to the Rufus, Lucy, and Wyatt’s story in the Timeless movie finale. The two-hour special will pick up right where the Season 2 finale left off. In an interview with Collider, Timeless executive producer Eric Kripke revealed that the while the movie will bring closure to fans, it will leave the story with an open door. “There’s a certain amount of shocking turns, and we tried to let it build to something and provide a certain amount of closure, and give you a sense of where these characters go,” said Kripke. “We tried to put a period at the end of the sentence, but not so much that the door isn’t open for further adventures, down the road.”

For fans of Timeless, the road has been a long and hard-fought one. The series has been cancelled twice, and both times fans took to the internet to save the show. This past summer, when the series’ future was still unknown, fans commissioned a helicopter to trail a #SaveRufus banner over the skies of San Diego Comic Con. Luckily, NBC executives took notice, and gave the series this movie finale as a bittersweet ending. But even though fans didn’t get the third season they were pushing for, they still haven’t given up. #Timeless is trending once again, and fans —including legendary Star Trek star William Shatner — are hoping to generate enough steam to get another season:

So whether or not there will be another Timeless project is still unknown, but you can count on the series' loyal fans to keep hope for the future alive.