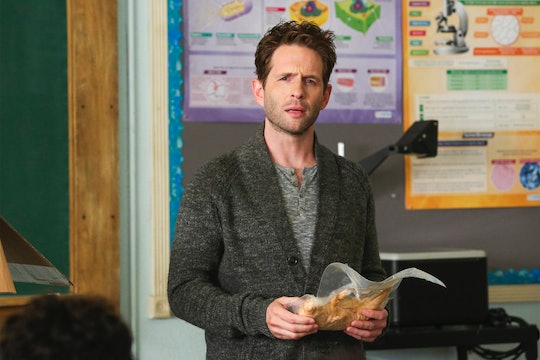 Don't Give Up On Another Season Of 'A.P. Bio' Just Yet

NBC introduced a number of new comedies this season, including A.P. Bio. The new series stars It's Always Sunny in Philadelphia alum Glenn Howerton as Jack Griffin, who thinks he's too good to be teaching an A.P. Bio class. With the first season coming to a close, it shouldn't be surprising that fans are asking will there be an A.P. Bio Season 2?

Update: Shortly after this article was published, NBC officially renewed A.P. Bio for a second season, according to TVLine.

Earlier: Unfortunately, the series hasn't been renewed for a second season just yet, but that doesn't mean it won't be. Though the show hasn't gotten stellar reviews, it still has garnered a pretty sufficient fanbase. Naturally, Howerton has brought along a lot of his fans from It's Always Sunny along with him to the new series, especially because the two shows have about the same level of dry humor. Even so, the ratings haven't been the best. According to TV Series Finale, the show's numbers have typically gone down with each passing episode, and only pulled in 1.692 million viewers during its penultimate episode. So if you're going off the numbers, it's not looking too good for this freshman comedy.

Even so, NBC has renewed shows in the past with less than stellar ratings and the network may be willing to give the series another chance, especially since it has such a powerhouse team behind it. The creator of the series is Saturday Night Live alum Michael Patrick O'Brien and both Seth Meyers and Lorne Michaels act as executive producers. So don't give up hope just yet.

Truthfully, the best way to make sure NBC renews A.P. Bio is to just keep watching and spread the word about how great it is. The whole season is on Hulu, so rewatching it again will also show NBC that people are into the series. And don't stop talking about it. Though it's rare, fans have saved a number of TV shows in the past like Timeless and Sense8. Showing you love A.P. Bio would only help the matter, so talk about it as much as you want, but especially online. Outside of that though, you'll just have to keep your fingers crossed this isn't the end of the line for the comedy series.

If you haven't seen A.P. Bio yet, you should definitely give it a shot. Though Jack is the main character of the series, the other characters really bring the hilarity in surprising ways, especially his students. For example, one of Jack's students, Heather, is quite quirky and fans love her out of pocket one-liners. Then there's Devin, who used to be bullied by Dan, who was later revealed to just be misunderstood. Dan also apparently has a crush on Heather. Now Devin's been sucked into Jack's latest plot to take down his arch enemy, Miles, though that never seems to work out as expected.

The other students, including Helen, Marcus, and Victor, have also been more and more fleshed out over the course of the season and the fans have picked out some of their favorites. The cast also does well with the school's faculty, mainly Principal Durbin, who is played by Emmy-winner Patton Oswalt. However, the trio of teachers — Stef (Lyric Lewis), Mary (Mary Sohn), and Michelle (Jean Villepique) — also bring their own funny moments to the series as well. Thus, the cast continues to shine time and time again, so it'd be interesting to see how the story would continue if it's granted a second season.

Don't miss the A.P. Bio Season 1 finale when it debuts on Thursday, May 3 on NBC.