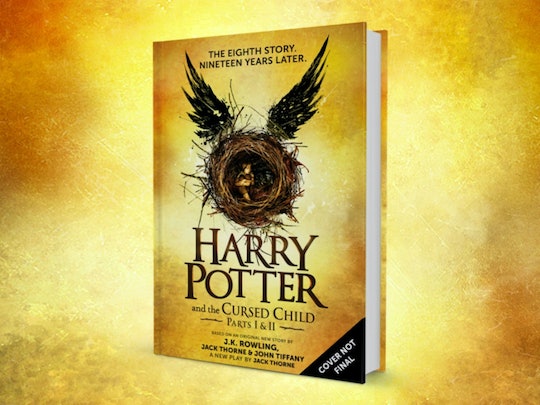 Will There Be An Audio Version Of 'Harry Potter & The Cursed Child'? It's Unlikely

Do things seem a little quiet around town? Are friends taking forever to respond to your texts? That's probably because they have their noses buried in Harry Potter and The Cursed Child, which was released at 12:01 a.m. on July 31. Although some people can curl up on the couch with Harry & Co. all day, others have things to do and places to go and may need another way to get through the unofficial eighth book in the series. Which begs the question, will there be an audio version of Harry Potter & The Cursed Child?

More Like This
If Your Kid Can’t Get Enough Dinosaurs, They’ll Love These 20 Shows
Meghan Markle's "Raising The Future" T-Shirt Has A Cute Connection To Archie
15 Of JAY-Z’s Best Quotes On Parenting
5 Sweet Gifts Meghan Markle & Prince Harry Have Given Each Other Over The Years

I hate to be the bearer of bad news, but as of now it seems like the only updates you can receive on Harry and his friends are in print. According to Snitch Seeker, an online forum for Harry Potter fans, there are no plans to release an audio version of Harry Potter and The Cursed Child. Both the U.S. publisher Scholastic and U.K. publisher Little, Brown Book Group told the website that there were no plans to record an audio version to accompany the release of the new book. But that idea hasn't been shot down entirely. Snitch Seeker wrote that an audio version may be recorded once a final version of the script is released. But until then, fans will have to wait.

It would make sense for Scholastic, the publishers behind the first seven Harry Potter books, to release an audio version of the script turned book this time around. And for many reasons.

For starters, releasing an audio version is a great way cater to fans who are visually impaired. In the past, Scholastic teamed up with the National Braille Press to release braille versions of Harry Potter, but they have yet to announce if that will be an option for the newest installment.

Clearly, where there's Harry Potter, there's money. And any company that passes up the chance to capitalize on that is just foolish.