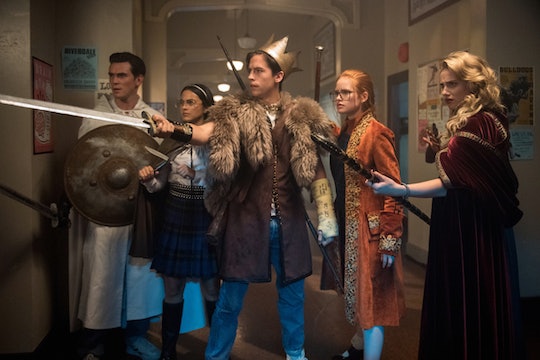 The 'Riverdale' Flashback Episode Will Reveal Some Dark Secrets

One of the most talked about episodes of Riverdale is finally here, and fans can’t wait to travel back in time to see the Riverdale parents in their teenage glory. Episode 4 of Season 3, “The Midnight Club,” is a flashback episode where the young cast turns into high school versions of their parents. Fans are counting on getting some much needed backstories, but they’re also wondering, will there be more flashback episodes of Riverdale?

As of now, there is no news of any additional flashback episodes. The showrunner, Roberto Aguirre-Sacasa told Entertainment Weekly that this flashback episode was not just put into the season for fun — similar to the musical episode in Season 2 — but was added with a specific purpose. “We didn’t do it just for the sake of doing it,” said Aguirre-Sacasa. “It actually told a story that was very critical to the ongoing storyline and really dimensionalized their relationship. It’s a fun idea, but we had to do it when it made sense and when it added to the season.”

The flashback episode will help move along one of the biggest mysteries of the season. In the present timeline, the Riverdale kids are playing a deadly game called “Gryphons and Gargoyles,” which has already led to the deaths of Dilton Doiley (Daniel Yang) and Ben Button (Moses Thiessen). Betty (Lili Reinhart) and Jughead (Cole Sprouse) have been following leads to find out who is behind the murders, and have found themselves in the crosshairs of the mysterious killer dubbed the “Gargoyle King.”

Aguirre-Sacasa told EW that the flashback episode would go back into the ‘90s and find the Riverdale parents playing the same dangerous game. “The mystery we’re telling, which is swirling around Gryphons and Gargoyles, we decided to weave the parents further into that story,” he said. “We wanted it to be the sins of the parents visited upon the kids, and we wanted to have the parents having played the game in high school. It felt like to make that real this could be a great opportunity to do the flashback.”

Getting to see the cast in their retro style is a treat, but it looks like the flashback episode will feature some fun moments as well. In a recent tweet, Aguirre-Sacasa posted a photo of KJ Apa and Cole Sprouse streaking during the flashback episode. He told EW that, in addition to the streaking scene, fans can expect to see emotional moments between the characters. “There’s a really great moment between Alice and Fred. There’s a really fun moment between Sierra and Tom Keller because we see them as well,” said Aguirre-Sacasa. “The show has always been about the past — the earlier generations and the way that the current generation of high school kids is wrestling with it. It’s great to finally be able to see that [and] have an episode that explores it.”

There may not be any more flashback episodes planned for this season (not yet, anyway), but at least fans will have this one opportunity to travel back in time and see how the Riverdale parents became friends. Hopefully, with some insight and backstory, fans will also get answers to the burning questions they’ve had since Season 1.

The Riverdale flashback episode, “The Midnight Club” airs Wednesday, Nov. 7 at 8 p.m. ET on The CW.