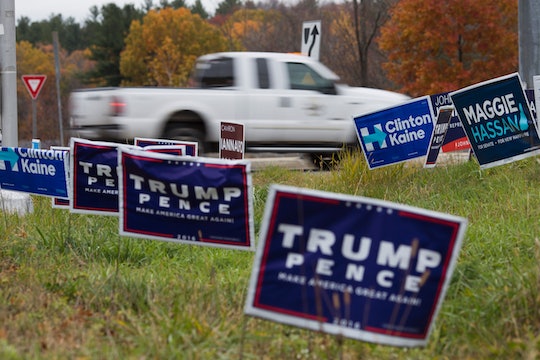 Will There Be Riots On Election Night? It's Entirely Possible

This Tuesday, millions of Americans will sit glued to their televisions, computers, and smartphones, watching as the results of the 2016 presidential election roll in. As the different states pledge their votes to Donald Trump or Hillary Clinton, following one of the ugliest election seasons in recent history, a winner will finally be chosen. But depending on the results, people on one side of the political aisle or the other might not be too happy. So will there be riots on election night? It is entirely and unfortunately possible, especially given how several high profile officials and individuals have encouraged mob-like behavior.

More Like This
Florida Homecoming Queen Accused Of Rigging Votes With Mom
33 Instagram Captions For The First Night Home With Your New Baby
Are You Breastfeeding & Also *Starving* At Night?
Josh Duggar's Family Has Spoken Out As He Faces Child Pornography Charges

When citizens are unhappy about things — especially on a national level — they take to the street in protest, something that, done in a non-violent form can be a fantastic way to demonstrate and use their voices. However, these peaceful acts can turn violent and become riots. Businesses can be ruined, cars can be set on fire, stores can be looted. While all of this seems like a stretch, it shouldn't be much of one — it is entirely possible that people will be upset enough with the results of the election to do any of these actions.

This election cycle in particular has been predisposed to violence. People have been injured inside and outside of rallies for both candidates, all across the nation over the past year and a half. When one of the remaining candidates eventually wins the election, who knows what kind of violence or riots will escalate in response.

It is safe to assume, based on the violence that has plagued citizens and security at rallies, that there might be a good deal of rioting on election night. This would not be the first election night where people feared violence, of course. During the 2012 presidential election, there were rumors that President Obama's supporters would riot if he lost the election. (As everyone knows, Obama won the re-election and nobody rioted — aside from a small disturbance that occurred at the University of Mississippi.) On election night in 2008, police prepared for possible riots, both in celebration and in protest of Obama getting elected, according to CBS News. However, nothing too big happened that night either.

Currently, according to NBC News, vigilant "preppers" are stocking up on emergency survival food "in case of an election night Doomsday." These people fear "post-election unrest that could involve everything from massive riots, to power grid outages, to the total collapse of the financial system where a can of food becomes currency." And according to Vox, while Trump has never called for his supporters to riot because of the results, his rhetoric about a "rigged election" could possibly cause people to become violent on his behalf; Incendiary language use by his highest profile supporters too — including Milwaukee Sheriff David Clarke ("It is pitchfork and torches time in America!") and former Illinois congressman Joe Walsh ("On November 9th, if Trump loses, I'm grabbing my musket. You in?") — could prompt crowds of unhappy or enthusiastic supporters to launch their own riots in the streets, no matter the outcome.

Not matter what happens on Nov. 8, an election night riot, anywhere across the nation — and no matter who wins — is not out of the question.