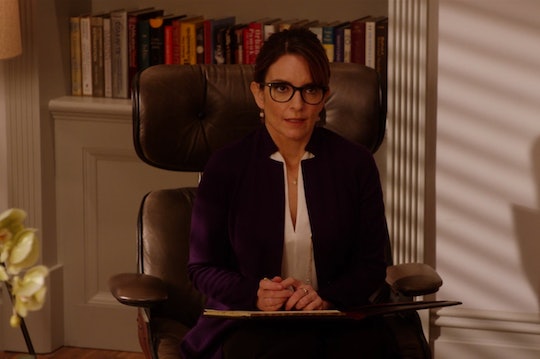 One of Unbreakable Kimmy Schmidt's biggest draws, when it was first announced, was the hope that it would bring co-creator Tina Fey back to a sitcom via cameo. And it did! During Season 1, it seemed she played a parody of Marcia Clark, the prosecutor who prosecuted the O.J. Simpson case, right down to her much-derided haircut and bad suits. She played Kimmy's prosecutor who basically made a mockery of the legal system — but whatever, Reverend Richard Wayne Gary Wayne was put behind bars. On Season 2, Fey made another cameo as Andrea, Kimmy's always-drunk psychiatrist. So, the question asks itself: will Tina Fey return for Season 3 of Unbreakable Kimmy Schmidt? Her track record suggests yes.

Since she played such a stylized character role in Season 1, it was totally believable when Fey returned as a different character a little closer to herself in Season 2 (like, with her own hair, for one thing). She plays Andrea, a drunk woman who hails Kimmy as her Uber driver when Kimmy switches day jobs. After their first ride together, Andrea starts calling Kimmy directly to get her home every night, because she's always wasted, and — let's face it — Kimmy's really good at going above and beyond the call of duty to help someone.

Andrea senses this and it's pretty clear from the ways she picks up on (and calls Kimmy out for) her behavioral patterns that she's a psychiatrist. Eventually, Kimmy figures that out and realizes that, by day, her wasted Uber rider is actually a seemingly put-together psychiatrist who's just really good at compartmentalizing. Drunk Andrea wants to treat Kimmy, because helping an Indiana Mole Woman readjust to non-captive life is such an interesting case. But Dr. Andrea realizes that she's already crossed unethical doctor/patient boundaries with Kimmy. Andrea winds up blackmailing herself (with Kimmy's help, of course) into taking Kimmy on as a patient, and they actually do really good work together!

The question is whether Fey will return as Andrea, or as yet another character altogether, if she returns for Season 3. As her character points out, therapy is a process, so there's plenty of room for Andrea and Kimmy's relationship to grow, especially since Andrea doesn't even turn up till the second half of Season 2. As a device, having a therapist for Kimmy in the storyline could really propel the show into some interesting directions, and help Kimmy explore different elements of her backstory and her personality. Plus it would kind of be a bummer to try playing that Kimmy has a completely successful psychological makeover in just a few episodes. But it's a sit-com, so really, anything could happen. Next season, Tina Fey could make a cameo as a local hobo squatting in Lillian's building, for all we know. So here's hoping Kimmy gets to stick with therapy.