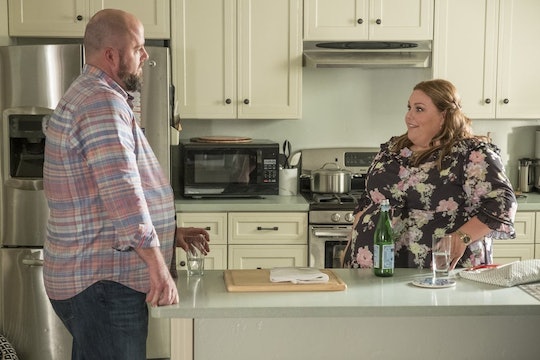 Last week's This Is Us Season 3 premiere was a gift from the TV gods. Like every other TIU episode that's bent my perception of what I thought I knew (then proved me wrong), the flash-forward scene at the end was its own unexpected gift. One glimpse at an older, scruffier Toby alone in bed — with no wedding ring — and no Kate in sight put viewers in a frenzy. Trying to decipher what it all means is its own painful paradox. So come on already — will Toby and Kate get divorced on This Is Us? For the love of all things good in the world, I hope not.

Of all the scenarios theorized about that final scene, fans everywhere seem to agree that Ka-Toby (Chrissy Metz and Chris Sullivan) either get divorced, or Kate dies. Uh, neither please? This flash-forward twist referring to Kate and Toby was an add-on from last season's mind-bending finale. In that episode, it was the first look at an aged, greying Randall (Sterling K Brown), and grown daughter, Tess. They spoke of going to see the mysterious "her" which now boasts its own black hole of theories. Tess said she wasn't ready — leading viewers to think "her" was Beth (Susan Kelechi Watson), either ill or dead. Super grim, right? Where's a Toby joke when you need it?

The Season 3 premiere showed different snapshots of what each family member had been through. In the present timeline, Kate and Toby struggle with fertility (potentially caused in part by Kate's Polycystic Ovary Syndrome, her weight, and Toby's low sperm count from antidepressants). All of this adds up to a huge "I'll pass" from their doctor as they seek IVF. Toby, being the kind-hearted husband he is, offers to give up his meds to up the sperm count. Kate declines, thankfully, since Toby even joked that he takes them so he doesn't cry all day. By the end of the episode, the previously dismissive doctor decides to give the couple a chance with IVF despite her misgivings. Toby flushes his pills anyway (bad idea, man), and the future of Kate and Toby, as far as viewers are concerned, could be on the fast-track to Divorce Town: population two.

Cut to the connection between last season's flash forward and Toby's wedding ring noticeably absent as he sat in a bed, alone. He answered a call from older Randall asking if he was going to see "her." Toby wasn't sure if he should go and Randall reassured that this "her" would want Toby to be there. I'm no sleuth but when it's all put together, it really looks like KaToby's future could be in jeopardy and I don't know how you're taking the news but I need a minute.

During a panel for members of the TV Academy, show creator, Dan Fogelman spilled a few tidbits about Season 3, saying the identity of "her" is part of the overall "endgame." In terms of the mysterious "her," he added "it will throw you a bit of a curve." So, like every other episode then?

The answer of who "her" is matters because it's all tied up in Kate and Toby's possible demise. Fans likely won't get the answer until later. Fogelman and his brilliant team of writers have spun every last detail from its inception. So much so, he already knows how the beloved series will end (yeah, that sound is my heart breaking prematurely). Viewers aren't meant to get all the info all in one week because there's too much story to tell. Such was the case with [Papa] Jack Pearson's death (Milo Ventimiglia) which spanned over two agonizing seasons. Even then — after I thought I was prepared — I wasn't ready to lose him. It was the same with Randall's biological father, William (Ron Cephas), and I'm not even joking, folks — I still cry over both losses. TIU resonates with so many, they become family you know, love, root for, and yes, grieve. So KaToby, I'm pulling for you.

If the pain of wondering whether Kate and Toby make it is too much for your already aching heart, the next episode may not provide all the answers, but that's not what you signed up for. Besides, knowing how Jack died doesn't make it hurt any less, am I right? *Sobs forever*