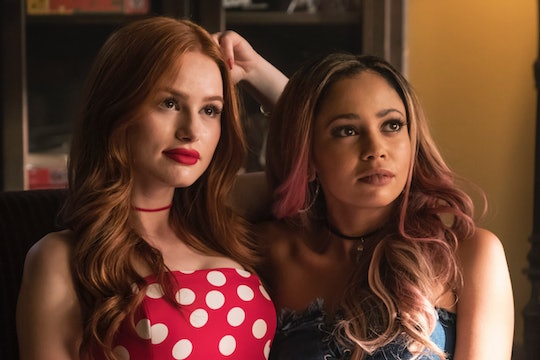 Toni & Cheryl May Be Headed For Trouble On 'Riverdale'

After a three-week hiatus, Riverdale is finally back, and fans couldn’t be more thrilled. The Feb. 6 episode ended with some key moments, including Toni and Cheryl’s first fight and their creation of a new gang called the Pretty Poisons. So far, as a couple, the two seem to be going strong, but is there trouble on the horizon for “Choni”? Will Toni and Cheryl break up on Riverdale?

With a handful of episodes left in Season 3 of Riverdale, it’s still a little too early to predict what might happen. But the CW’s synopsis for the upcoming episode, “Requiem for a Welterweight,” does tease that the couple may be in for a little bit of trouble. “Cheryl’s attempt to send the Serpents a message causes tension between her and Toni," reads the description. But what kind of message does she send the Serpents, and does she do it behind Toni’s back?

In a trailer for Episode 13, fans see Toni tell Jughead that she’s not part of the “family” anymore, probably in reference to her departure from the Serpents gang and her loyalty to the Pretty Poisons and Cheryl. After the Serpents kicked the pair out, Cheryl initiated this all-girl gang as a gift for Toni — to replace her old gang family with a new one — and now they’re supposed to be standing side-by-side to lead their fierce new group. In one tiny snippet from the trailer, you can see Cheryl training the Pretty Poisons to use a bow and arrow.

But if Cheryl threatens the Serpents in anyway, especially without Toni’s knowledge, I can see why Toni might get upset. She has been a lifelong Serpent, and despite her disconnection from the gang, she probably still has some kind of love and respect for them. The Serpents were Toni’s only family for a long time, and finding out that Cheryl talked to them behind her back may cause her to question their new power dynamic.

While the two aren’t mentioned in the CW synopsis for Episode 14, there is a little ambiguous foreshadowing in the description of Episode 15, titled “American Dream,” which hints “Cheryl and Toni find themselves at a crossroads.” While it is clear that they’ll be taking a huge step in their relationship, it’s not clear if they’ll be going forwards or backwards. But of course, this is Riverdale, and literally anything can happen. They could constructively move past their differences, like they did in Episode 13, or they could break-up.

Then there’s the question of Penelope, who is known to do absurd things to get her way. She has been vocal about her disapproval of Toni and Cheryl’s relationship, and I can’t put it past her to scheme a way to break the two up. She’s done far worse in the past, and it’s completely plausible that she’s involved in their gang dealings now too.

With so much time left in the season, there’s still a lot that can happen for Choni. With their new gang, they’ve turned their relationship into a political partnership, which could cause major rifts between them. But, like Varchie, I think there’s still hope for Choni, and even if they break up this season, there’s no reason they can’t get back together again next season.