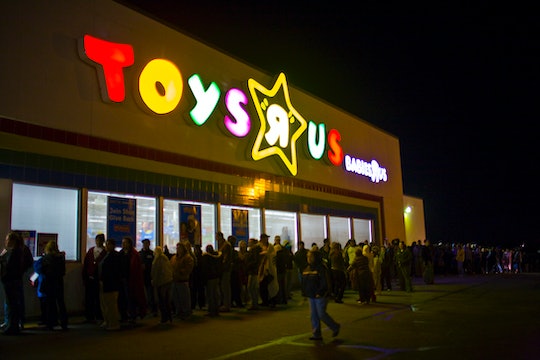 Will Toys “R” Us Close Before Black Friday?! People Are Freaking Out

Toy retailer giant Toys "R" Us filed for Chapter 11 bankruptcy protection on Monday, which was a bit of a shock to many. But it's really just the latest in a line of store chains that have had to file for bankruptcy in the age of Amazon and other online shopping options, and hopefully, the move just means that the company can restructure financially and come back stronger than ever. But in the meantime, shoppers are concerned about whether Toys "R" Us will close before Black Friday, and whether the stores won't be an option for the upcoming holiday season.

So it's apparently not time to panic that your local Toys "R" Us will shutter before Black Friday this year. But what about holiday seasons after that?

Toys "R" Us plans to use $3 billion in bankruptcy financing to purchase merchandise from vendors and to fund operations, according to NPR. That doesn't suggest that the company is planning on completely throwing in the towel anytime soon. The company's stores as well as the Toys "R" Us website will continue to operate as usual, particularly during the holidays this year, and hopefully that influx of finances will give the company the boost it needs to come back from the financial edge.

But it might not be enough. A "hefty debt load," along with the popularity of online shopping, hindered the company in recent years, according to The Wall Street Journal. And while some refinancing might help with the debt aspect of the company's difficulties, online shopping is clearly here to stay, and Toys "R" Us might not be able to compete with online giants like Amazon in the future.

Toys "R" Us said it does not expect any immediate impact on its stores in the United Kingdom, and the store's operations in Australia and Asia are also not included in the bankruptcy proceedings, the BBC reported. That's hopefully a good sign that the company isn't going to completely shut down anytime soon. But what can Toys "R" Us do to survive through not just this Black Friday, but for many holiday seasons to come?

Toys "R" Us reported a more than 4 percent drop in same-store sales in the first quarter this year, and a bigger loss more than a year ago, according to Fox 2 Now. The company also closed its store in New York City at the end of 2015, that outlet reported. The closure of the Times Square Toys "R" Us was a result of high rent in the city, but it still felt a little foreboding for the future of the company at the time. A temporary store has reportedly opened in Times Square for the upcoming holiday shopping season as a result of customer demand, so apparently, it's popular enough there to have led to a store opening rather than closing in time for Black Friday this year.

But what about other parts of the country? How long will Toys "R" Us be able to stay open in other regions, if Amazon and other online retailers continue to be a popular alternative for toy shopping?

The fact is, the future of Toys "R" Us is uncertain. The majority of the company's stores around the world remain profitable, but it is reportedly relying on online sales to be successful in the future, according to the BBC.

For now, your local Toys "R" Us should be open for Black Friday as usual, unless you've heard otherwise. Toys "R" Us is not reported to be closing stores before the holidays as a direct result of filing for bankruptcy. But it might not hurt to shop there this year if you're at all concerned about Toys "R" Us stores staying open for holiday seasons still to come.