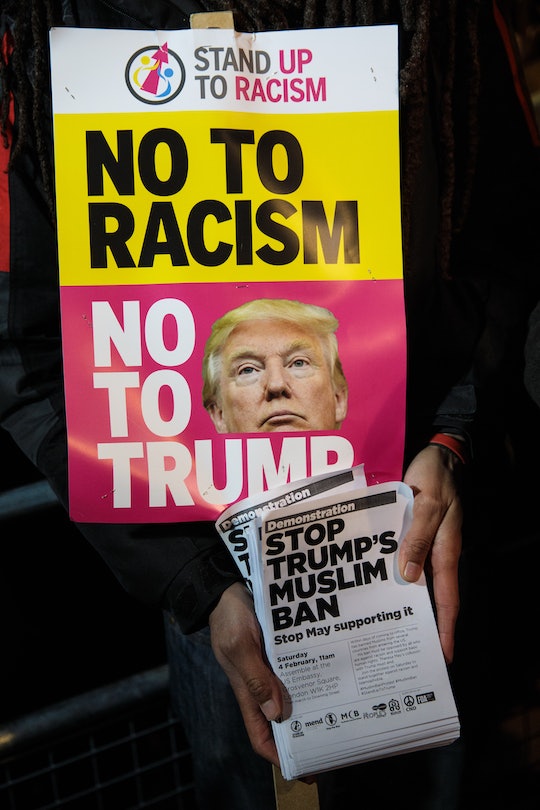 President Donald Trump will be speaking before a joint session of Congress on Tuesday evening, and the nationally televised speech will likely be closely analyzed by the many groups of Americans who feel threatened by the president's policies. One such policy, of course, is the infamous travel ban that was temporarily suspended by the 9th U.S. Circuit Court of Appeals earlier this month. So will Trump address the travel ban in his State of the Union-style speech? It's possible, but signs indicate that his focus will be on domestic policy.

Trump's speech, for the record, is technically an "address to a joint session of Congress" rather than a "State of the Union," because a State of the Union must be given after the first year in office is completed. That said, Trump's speech will contain the typical elements of a State of the Union: As designated in the Constitution, these speeches to Congress allow a president to "recommend to their [Congress'] consideration such measures as he shall judge necessary and expedient," according to The Hill.

An update about the highly controversial travel ban — which banned travel from seven predominantly Muslim nations and temporarily banned refugees — certainly seems like a politically expedient matter. But an outline of Trump's speech obtained by numerous media outlets doesn't specifically mention the ban among the expected talking points.

The brief outline of the address to Congress, which came from the White House and was shared with select publications, contains 11 bullet points. According to a printing of these points at Politico, the president plans to discuss "tax and regulatory reform," along with "saving American families from the disaster of Obamacare." Trump is also likely to talk about "making sure every child in America has access to a good educations," and he will also discuss "a great rebuilding of the American military." The list also references veterans issues and "making the workplace better for working parents."

The preview of Trump's address also claims that the speech will be "an optimistic vision for the country that crosses the traditional lines of party, race and socioeconomic status." The White House's emphasis on "optimism" is likely intended to contrast Tuesday's speech with the inaugural address, which many felt was dark and pessimistic. According to NPR, Trump's address to Congress will be written by White House advisor Stephen Miller — and when looking at Miller and his past work, it's definitely "optimism" that comes to mind, right?

In terms of the immigration ban, White House Press Secretary Sean Spicer was likely alluding to the ban when he told reporters on Monday, "I would not anticipate the speech being a defense of legislation and executive orders... but you will hear about his commitment to immigration and his desire for border security." In other words, while it seems likely that Trump will discuss national security in general terms, he won't discuss the intricacies of either his immigration ban or his recent crackdowns on undocumented migrants from Mexico and other nations.

As far as the immigration ban, one gets the feeling that the White House doesn't want to discuss it until later in the week, when a new version of the court-suspended executive order will be released. According to reporting at Reuters, the 9th Circuit Court — the court that suspended the order — today rejected a request from the U.S. Department of Justice to "place on hold an appeal over President Donald Trump's travel ban on people from seven majority-Muslim countries." According to Reuters, the rejection of this request essentially puts "pressure on the Trump administration to clarify its intentions regarding the controversial executive order."

At Monday's press conference, Spicer reiterated the White House's intention to release a new executive order "some time this week." So while Trump might evade the topic at his address to Congress, it will certainly make headlines later this week.