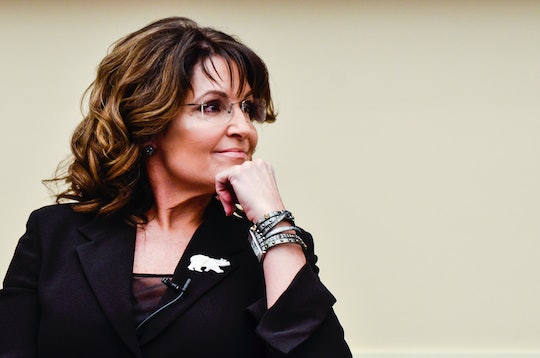 Will Trump Choose Sarah Palin As His Running Mate? She's Been Fiercely Loyal To Him

When Trump was still a pariah among the establishment, there was one befuddled barracuda ready to jump to his defense with enthusiasm: Sarah Palin. Will he repay the loyalty by putting her in the run for vice president once again? Will Donald Trump choose Sarah Palin as his running mate? Here's why I think it's a totally plausible choice.

Ever since Donald Trump locked up the GOP nomination for the presidential race, it's been hilarious to watch all the Republican suits who denounced Trump and his candidacy pull off a Cirque du Soleil level flip-flop. Just a few months ago, former Texas Gov. Rick Perry called Trump a "cancer." Last week, Perry endorsed Trump and added for good measure he "wouldn't say no" to the VP job. And he's not alone. New Jersey Gov. Chris Christie, Former Louisiana Gov. Bobby Jindal, and others are falling into line and all over themselves to court Trump to pick them as his running mate. But all the while Sarah Palin's been the tireless, scrappy defender by his side, ready to take on all comers. In fact, just this week Palin declared Speaker of the House and GOP darling Paul Ryan's career "over" after he said he wasn't ready to support Trump yet. And for a guy like Trump who says he prides himself on loyalty, maybe Palin isn't a such crazy choice. Here are just a few reasons why Palin might just be the perfect Donald Trump running mate.

Palin's Got Her Own "Woman Card"

Trump's numbers among women are garbage. Worse than garbage. Like, historically terrible. Adding a woman to the ticket would be of benefit in two important ways: first to diffuse and disarm any attacks of sexism from former Secretary of State Hillary Clinton; and second, as a way to try and win over a few more conservative women. As of April 1, 2016, seven in 10 women surveyed by Gallup had an unfavorable view of Trump. It's true that Palin's approval ratings aren't much better than Trump's, but she might offer him some much-needed cover on a few of his more outrageous and sexist statements over the years.

Much of the reason Ryan and other conservative die-hards are having a tough time coming to terms with supporting candidate Trump is that he isn't tethered to many of the basic principles conservatives hold dear: small government, Constitutional liberty, tax cuts at all costs, etc. These aren't ideologies that Trump has shown much affinity for. Palin is similar to Trump in that she's most comfortable painting broad strokes of "Making America Great" and hasn't been prone to getting lost in the policy weeds (which means her policy ideas are often general, hard to understand, or not enforceable). Trump might find that to be a strength in the general election while not having to worry about being swayed and influenced by an overly ideological running mate.

Much like Trump, Palin's appeal is in her outsider, busting-up-the-status-quo street cred, which is what Trump's supporters overwhelmingly are drawn to about his candidacy. Palin's political career in on brand with Trump's shoot-from-the-hip, brash political style, so if he's looking for someone more like himself, rather than a complement, in a running mate, Palin fits the bill there, too.

As I can only imagine Palin reminds her husband Todd over coffee in their Alaska kitchen, if Trump did tap her for veep, this wouldn't be her first rodeo. And even though her 2008 bid as John McCain's running mate was a bit of a crash and burn (and she wound up going home and quitting in the middle of her term as Alaska's governor), she still has more experience in government than Trump.

As for her public position on talk of her as Trump's VP, Sarah Palin said there are plenty of people who would make great running mates for Trump besides her and that she wouldn't want to "burden" his campaign with her political baggage. (How modest.) But, she didn't close the door to the gig altogether, saying she'd already been vetted for the job.

"I think I'm pretty much as vetted as anybody in the country," Palin told CNN. "I think if someone wanted to choose me, they already know who I am, what I stand for. I would be willing to serve in any capacity that I could be of help with Donald on."