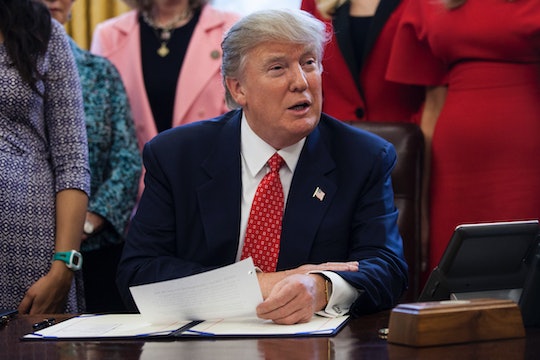 Will Trump Discuss Immigration During His Speech?

Speaking to Congress on Tuesday night, President Donald Trump will, according to White House officials, attempt to communicate a message of unity, despite his plan to address some very contentious topics. Many are wondering, then, if Trump will discuss immigration during his speech to Congress. A senior member of his administration told reporters that the president will definitely address the enforcement of existing immigration laws. There's also a chance that Trump might add his vision for a new immigration bill.

The aforementioned official told CNN that the proper time to pass immigration legislation necessitates “a softening on both sides. There's got to be a coming together." Therefore, Trump’s compromise immigration bill could have a chance at passing — that is, if both sides of the aisle are willing to concede a few of their respective demands. The Hill reported that the potential bill "would allow some undocumented immigrants to live and work in the U.S. without fear of deportation," though it still would not "[offer] them a pathway to citizenship."

It’s yet to be seen whether or not the Republican party, which holds congressional majorities, will accept a perceived “softening,” as Trump’s prior immigration promises could most easily characterized as "tough." But few of Trump's immigration efforts have been successful; Trump's initial travel ban was stopped by the courts in its first iteration. Furthermore, his proposed wall between the United States and Mexico has only strained relations between the countries, with Trump insisting that the Mexican government will pay for the wall. Perhaps, then, a safer compromise could yield actual action and progress.

Regardless of whether or not an immigration bill is brought up in his speech, immigration itself will definitely still be addressed. Trump invited the families of three people who were victims of violence from undocumented immigrants to join him on Tuesday night; Trump’s guests have been highlighted to illustrate the policies and issues that he presents, advocating for his position. Politico reported that, as an obvious opposition to Trump’s stance on restricting immigration, several Democratic lawmakers intend to bring undocumented immigrants to the event as guests of their own.

Immigration will definitely be on the table Tuesday night, but the extent to which it’s addressed is still up in the air. Time will tell whether or not a compromise immigration bill has a chance in Congress; On one hand, it could bring parties together — on the other, it could upset Trump’s base completely. No matter what happens on Tuesday, though, Trump is expected to sign a new executive order on immigration the day after his speech — a rewrite of his previous, unsuccessful ban on members of seven Muslim-majority nations.