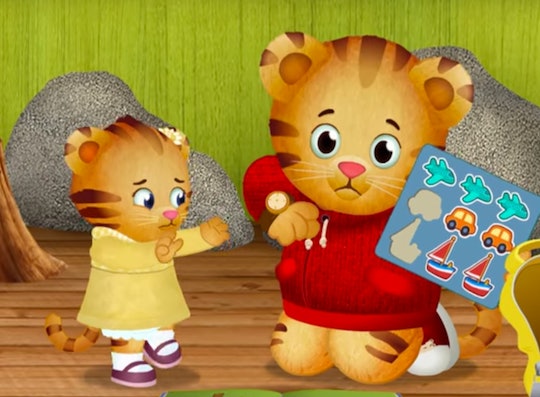 'Daniel Tiger's Neighborhood' Could Be In Trouble

Donald Trump is embarking on a fight to increase military spending by tens of billions of dollars and to allocate the funds to build his controversial wall along the U.S.-Mexico border. To do that, the president and his administration have unveiled a blueprint for a 2018 budget that would reduce funding for programs like those within the Department of Education, while simply eliminating others, like the Corporation for Public Broadcasting (CPB). Many of the cuts in the proposed budget would be devastating for children and families, and the loss of the CPB could result in the end of educational programming many see as vital. So, parents of the preschool set have every reason to wonder whether Trump will take Daniel Tiger's Neighborhood off the air.

The popular animated children's show helps 2 to 4-year-olds "learn the key social skills necessary for school and for life," through engaging storytelling and musical strategies, according to its official site. It also airs on PBS, which accepts crucial funding from the on-the-chopping-block Corporation for Public Broadcasting. In a statement released after the blueprint for the proposed budget was released Thursday morning, PBS president and CEO Paula Kerger stressed that keeping PBS afloat is relatively cheap, costing just $1.35 per citizen per year.

And Daniel Tiger's Neighborhood certainly aims to make the most of its funding by teaching kids lessons on topics ranging from dealing with disappointment to sharing.

In a bizarre defense of the proposed budget, Office of Management and Budget director Mick Mulvaney said on MSNBC's Morning Joe that people he ostensibly believes aren't interested in PBS or National Public Radio, which the CPB also funds, shouldn't have to help keep them running:

Condescension aside, it's sort of mind-boggling that Mulvaney considers PBS irrelevant for "a single mom in Detroit." After all, the station is dedicated to "increasing school readiness for kids 2-8, support for teachers and homeschoolers, lifelong learning, public safety communications and civil discourse," as Kerger wrote in her statement.

Right now, the CPB claims about $485 million of the $4 trillion federal budget, The Huffington Post reported. And, according to The Washington Post, it's actually the small local outlets — not the giants that are PBS and NPR — that would feel the loss of the CPB most acutely, and possibly even fold under its weight. Having received nearly $400 million in grants from the agency in 2014 compared to PBS and NPR's combined not-quite $43 million, these local stations actually get about 90 percent of the money that flows from the federal government via the CPB.

There's a long road ahead of Trump's budget before it's approved, especially considering that it faces serious opposition in Congress. So, there's always the chance that the CPB could ultimately be spared, no matter how much some Republicans would like to see the government divorced from it and other programs that promote the general welfare.

Only time will tell what exactly the loss of the government funding would mean for PBS as a whole, let alone its individual programs like Daniel Tiger's Neighborhood — though many are hoping we never have to find out.