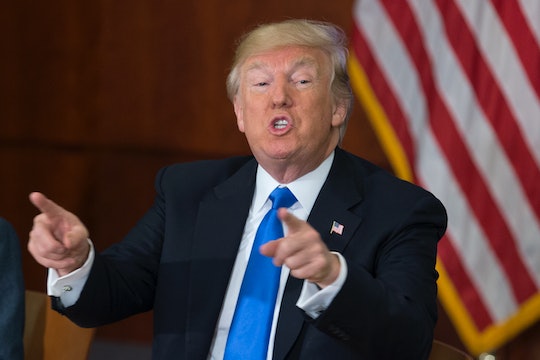 Will Trump Testify In The Russia Investigation?

Former FBI Director James Comey testified before the Senate Intelligence Committee on Thursday, and it's no surprise that President Donald Trump was not happy with what he said. But will Trump testify in the Russia investigation? Because tweeting and sending out surrogates to speak on your behalf don't quite carry the same weight as speaking under oath. Comey alleged that Trump said, "I need loyalty, I expect loyalty," and that he said, "I hope you can see your way clear to letting this go, to letting Flynn go," which Comey interpreted as a request to drop a federal investigation of former national security advisor Michael Flynn. A representative for Trump did not immediately respond to Romper's request for comment.

Trump's response was uncharacteristically tame; he waited nearly 17 hours after the conclusion of the public hearing before posting a single tweeting in response, claiming "so many false statements and lies" (while not identifying a single one) and fixating on Comey's status as a "leaker," one of his favorite new insults. However, Trump's attorney, Marc Kasowitz, made a public statement about an hour and a half after Comey's testimony, and White House spokeswoman Sarah Huckabee Sanders told the press, "I can definitely say the president is not a liar, and I think it's frankly insulting that that question would be asked," according to NPR.

Kasowitz's statement began on the offensive: he highlighted Comey's assertions that while he was FBI Director, Trump was not personally under investigation, and that he didn't believe that any ballots were altered by Russian hackers during the 2016 election. Kasowitz also claimed that Comey "unilaterally and surreptitiously made unauthorized disclosures to the press of privileged communications with the President," according to the Washington Post, and implied that Comey had lied about his motive for passing his memos on to the press, based on the false claim that The New York Times had quoted from them before the date Comey said he leaked them. According to NPR, the article Kasowitz referenced made no reference to the memos. Romper has reached out to Kasowitz for comment, but was unable to contact Comey or a representative at this time.

But it seems odd that Kasowitz would characterize the memos as "privileged communications with the President," because he also claimed that Trump never asked Comey for loyalty, and "never, in form or substance, directed or suggested that Mr. Comey stop investigating anyone, including suggesting that that Mr. Comey 'let Flynn go.'" If the memos aren't real, how can they be privileged? Comey testified to the Senate under oath that Trump said those things. If Trump believes that Comey is guilty of perjury, shouldn't he offer his own testimony (as well as any "tapes" he may or may not have) to prove it? Seems like a no-brainer.