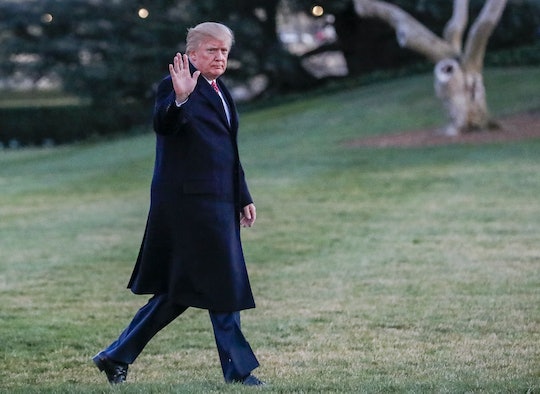 Will "Trumpcare" Cost More Than Obamacare?

President Donald Trump hasn't wavered on his disdain for the Affordable Care Act, often referring to it as a "disaster," and repeatedly vowing to repeal the plan and replace it with something better. Shortly before his inauguration, Trump promised that he would ensure top-notch healthcare for all Americans, but after a proposal of the GOP's American Health Care Act was released Monday evening, many are wondering exactly how he intends on doing that. Will "Trumpcare" cost more than Obamacare? The GOP has yet to release the financial impact of the actual plan itself, but the individual cost to consumers appears to depend largely on two factors: age and income level.

One major reason cited by Trump and the Republican Party for their dislike of Obamacare is that it's not affordable. Critics of the plan cite increasing premium hikes as an example of the government's overreach, and since participation in the program has been mandatory, many have argued that consumers have been prevented from choosing the options that are best for them individually. In a statement following the proposal's unveiling, the White House said the American Health Care Act would help "[restore] healthcare choices and affordability back to the American people,” according to The Independent, which certainly sounds promising. But for the estimated 20 million previously-uninsured Americans who gained comprehensive health coverage under Obama, it seems as though choice and affordability might have come at the cost of actual accessibility.

One big difference between Obamacare and the the American Health Care Act from a financial standpoint is that the GOP has erased two important taxes currently levied against the wealthy that have been necessary to make Obamacare work. According to Politico, the American Health Care Act will do away with a 3.8 percent investment tax beginning in 2018, as well as a 0.9 percent tax paid by those earning more than $250,000 per year. While official numbers haven't yet been released, it has been estimated that removing those taxes could cost "more than $300 billion over a decade." The upside, at least for the rich? According to the Tax Policy Center, the top one percent of earners, who bring home more than $774,000 a year, would save about $33,000 annually under Trump's healthcare plan, according to CNN.

That likely won't be such great news though for the middle-American Trump supporters who expected him to "drain the swamp" and fight back against the Obamacare premium hikes and mandatory penalties for remaining uninsured, which they felt were unfair.

While the penalties will be eliminated under Trump's plan, according to Politico, health insurance itself won't necessarily be cheaper, particularly for the millions of Americans who relied on income-based Obamacare subsidies in order to afford their premiums in the first place — the bulk of whom actually come from states who voted for Trump in the election, according to CNBC.

That's because the American Health Care Act replaces Obamacare subsidies with age-based tax credits. That means that the credit you are eligible for would increase as you age, but, according to The New York Times, an age-based system "would be valuable only to people who can afford to pay the rest of their health insurance bill. Unlike with the Affordable Care Act, which offers the biggest subsidies to those struggling the most financially, even high-income Americans currently earning too much to receive an Obamacare subsidy would get a tax credit under Trump. And overall, the tax credits available under the American Health Care Act would offer less assistance to those currently relying on Obamacare subsidies.

So who benefits, other than the wealthy? Mostly the younger, healthier Americans who were angry about being pushed into buying comprehensive plans they didn't need in order to balance out the overall cost involved with providing coverage to older or higher-risk individuals. Under Trump's plan, those young, healthy people will likely have the option to choose less-expensive coverage, not to mention that they won't have the pay the penalty for not being insured that many were choosing as the least expensive option under Obamacare. But they will also be getting less as a result — not the same level of insurance for a lower price.

Another aspect of Obamacare taking a big hit under Trump? Medicaid, which helps provide health care services to lower-income Americans. Obamacare provided expanded funding for Medicaid, allowing the program to include an estimated additional 11 million Americans who earn up to $16,400 a year, according to CNN. But the American Health Care Act plans to end the expanded funding for new enrollees beginning in 2020, and those already enrolled in the program would have to maintain continuous coverage to remain. What's more is that the American Health Care Act would begin instituting per-capita limits on state funding for Medicaid, meaning that the amount of Medicaid funding available would likely decrease overall. For the more than 70 million people currently receiving Medicaid coverage, Trump's plan will likely result in fewer people being considered eligible for the program, fewer benefits, or both.

In theory, the American Health Care Act might indeed be able to make health care more affordable from a bottom line perspective. But as Kaiser Family Foundation senior vice president Larry Levitt explained to CNN, from an individual standpoint, it's clear that many Americans have a lot to lose:

With Medicaid reductions and smaller tax credits, this bill would clearly result in fewer people insured than under the ACA. The House GOP proposal seeks to reduce what the federal government spends on health care, and that inevitably means more people uninsured.

There are other controversial provisions too — like the plan's one-year freeze on federal funding to Planned Parenthood, according to The Independent, and the fact that any insurance plans that cover "elective" abortions will not be eligible for tax credits, according to Vox. But from a purely financial standpoint, it appears that the current version of the American Health Care Act seems to be poised to take away much-needed healthcare in the name of personal choice, and less government involvement. And given that public support for the Affordable Care Act is currently the highest it's ever been since it was introduced, according to The Independent? It seems as though an awful lot of Americans who have been relying on a more equitable health care insurance program under Obama will be worse off under the GOP.

There's no question that the Affordable Care Act is far from a perfect system, and that those who were seeing their premiums increase to levels they felt were unfair had a right to be upset. But returning to a system that leaves many Americans on their own, or with fewer healthcare options in favor of offering a cheaper plan to those who already don't have to worry about their healthcare costs seems like a huge step backwards for the country.