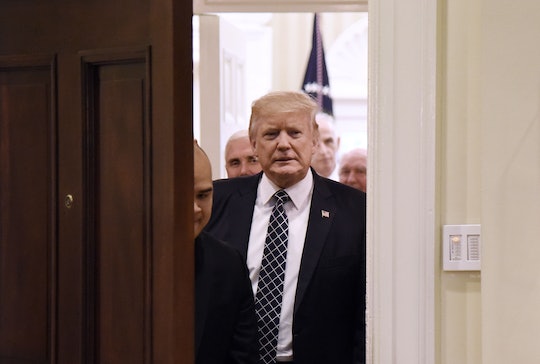 On Wednesday, President Donald Trump unveiled a one-page outline of his long-awaited tax reform package that has most of America baffled. It's an intentionally vague proposal, one that is light on key details and heavy on grand posturing. Despite its lack of specifics, the outline does give insight into who will win and who will lose under Trump's proposed plan. For example, will Trump's child care tax plan help single moms and other single parents? No, not unless they earn high incomes.

According to the Washington Post, Trump's new child care tax plan deviates from his previous proposals in one significant way: It now seeks to boost the Child and Dependent Care Credit, a section of the tax code that hasn't been updated since 2003. Trump made this change in response to criticism that his previous tax proposals failed to ease the burden of child care costs for lower-income families, The Washington Post reported. This iteration of his child care tax plan isn't much better.

It's unclear how the Child and Dependent Care Credit would change under Trump's proposal. According to the Washington Post, a senior official from the Trump administration said that working parents would be able to receive a maximum credit of $2,100 on their income tax bill for child care expenses. That's already the cap amount allowed under the current tax code, so it's unclear if Trump's plan expands the maximum credit to families earning more than $15,000 but less than $43,000.

Still, as MarketWatch points out, most single parents and families earning a low-income wage don't owe enough in taxes to even benefit from the Child and Dependent Care Credit. According to Slate, the president is allegedly drafting a plan that would raise the credit value as well as limit the amount wealthy families could receive from it. The Trump administration is also considering making the Child and Dependent Care Credit refundable, Slate reported. But that change wouldn't make a significant dent for families or single parents earning a low wage.

In response to the proposal, Michelle McCready, deputy chief of policy at Child Care Aware of America, told MarketWatch,

Child care continues to be a major cost burden for families across America. Without a long-overdue increase in funding for direct child care assistance, millions of families will still struggle to pay for the child care they need to work.

Child care costs continue to rise to astronomical levels and Trump's new child care tax proposal does nothing substantial to offset that burden for single parents earning low wages. If he wants to help single parents and families earning low income, than he needs to make changes that won't benefit his rich friends.