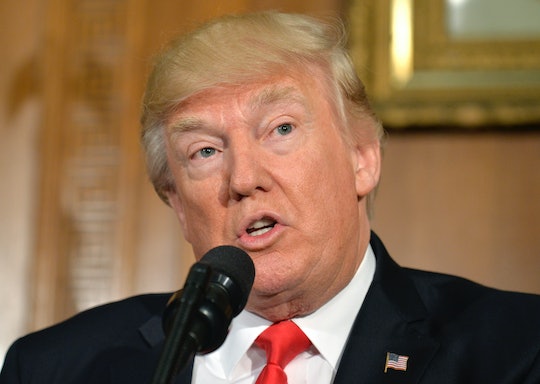 With just two days until President Trump's 100th day in office, Treasury Secretary Steven Mnuchin announced the administration's much-anticipated tax reform plan in a White House press briefing on Wednesday. Trump's tax plan will provide significant tax cuts to some of America's most wealthy. In addition, it will slash the corporate tax rate more than half, from 35 to 15 percent. But what about for the average American: Will Trump's tax plan help middle class families?

Mnuchin said in the briefing that Americans can expect a simpler tax code based on Trump's tax plan, a code so much simpler that people could fill out their taxes on a "large postcard." It seems as though Trump's own tax reform has simplified considerably from his tax plan while on the campaign trail: Wednesday's release of Trump's tax proposal is just one page, compared to the near-epic four-pager of a tax plan Trump touted during his campaign.

In Trump's campaign-version of his tax plan, his number one promise was to provide "tax relief for middle class Americans." Trump's campaign tax plan even invoked the American dream, promising more money in people's pockets. But does Trump's tax proposal really live up to his campaign promises to middle class families?

How Trump's Tax Plan Might Help The Middle Class

Additionally, Trump's tax plan proposes to reduce the current income tax brackets from seven into just three, at 35, 25, and 10 percent. Unfortunately, Trump's one-pager was rather light on details as to who falls into which tax bracket, and Mnuchin failed to elaborate on what those income ranges might look like.

In a shock to pretty much no one at this point, America's wealthiest stand to benefit tremendously from Trump's tax plan. Chuck Marr, director of federal tax policy at the Center for Budget and Policy Priorities, called Trump's tax plan "lopsided" in how it favors the wealthy. Speaking to USA Today, Marr said the richest 1 percent of Americans will see after-tax income increases of 14 percent, while low- and middle-class income holders will only see incomes gains ranging from a paltry 1.2 to 1.8 percent after taxes.

One of the biggest tax cuts proposed in Trump's plan is cutting the corporate tax rate by more than half, from 35 to 15 percent. But more alarmingly, Trump's tax plan allows "pass-through" businesses to be eligible for the corporate tax rate. These businesses include entities such as LLCs, S corporations, and partnerships and tend to benefit the richest 1 percent of Americans. According to Think Progress, much of the Trump Organization is made up of pass-through businesses. Representatives for the Trump Organization and the White House did not immediately return Romper's request for comment.

Trump's tax plan as it stands right now has all the substance of a desert mirage. At first glance, massive tax cuts look spectacular from a distance. But as you walk closer to it, the substance vanishes — much like how Trump's tax plan provides no details about how to actually fund said tax cuts. Remember: The United States operates on taxpayers' money, so if taxpayers are chipping in a whole lot less, the rest of that money needs to come from somewhere else. Popular targets such as federal welfare programs like Medicare could be on the chopping block, as well as other federal budget cuts that would ultimately hurt Americans in the long run.

Given that the bottom line of Trump's tax plan would drastically increase America's deficit — by as much as $3 to $7 trillion, according to the Committee for a Responsible Federal Budget — it's unlikely to win the support of the the GOP in Congress. As it stands, Trump's tax plan is hardly the promise of living the American dream as he touted during his campaign — unless of course, you're already living the American dream as one of America's wealthiest.