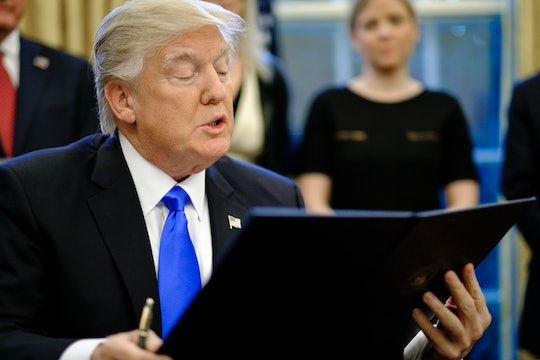 Will Trump's Travel Ban Be Overturned?

In what's been an already chaotic, disappointing, and terrifying start to President Donald Trump's tenure as POTUS, the president issued a ban on Muslims entering the country. Hours later — thanks to brilliant, quick, and meticulous work by the ACLU, lawyers, and the voices of thousands in protest — a federal judge granted a stay to those detained. But what worked tonight isn't guaranteed for tomorrow, which means we have to ask: Will Trump's travel ban be overturned?

Here's what we know so far: As BuzzFeed reports, a Brooklyn federal judge granted a nationwide stay of removal — which prevents deportation — of all those affected by President Trump's latest executive order specifically targeting refugees and immigrants hailing from seven countries. The stay of removal, issued by US District Judge Ann Donnelly, was issued immediately following the first hearing that challenged the order, BuzzFeed reported. Further hearings and procedures, which will tackle the question of whether or not the ban is even constitutional, are set for February. Right now, the stay is a small, minuscule step in the right direction. It protects those in transit Friday and Saturday from Trump's executive order. But no one knows what Sunday will bring. Or Monday. Or next week. Or next month.

Trump's executive order, signed on Friday, January 27, is a 120-day suspension, which applies "indefinitely" to refugees from Syria. The order also prevents individuals from Syria, Iraq, Iran, Somalia, Libya, Yemen, and Sudan, from entering the United States for 90 days. According to a BuzzFeed report, Trump said of the ban: "Protection of the nation of foreign terrorists entry into the United States. Big stuff.” CNN estimates that the 120-day ban will affect more than 130 million people. Following the news of the ban in the United States, Iran's foreign ministry released its own statement in response to the actions of the US government:

The US decision to restrict travel for Muslims to the US, even if for a temporary period of three months, is an obvious insult to the Islamic world and in particular to the great nation of Iran. Despite the claims of combating terrorism and keeping American people safe, it will be recorded in history as a big gift to extremists and their supporters.

Because details are still so murky on what exactly what happen to the ban in the light of day tomorrow, it's important to understand what the stay of removal means right now — and exactly who it affects.

The stay only applies to those in transit at the time the stay was granted. The Department of Homeland Security released the following statement on Sunday, January 29:

The full statement can be found through the DHS' website. Right now, though it's not a long-term solution, the stay of removal has likely meant the difference between life and death for those at airports all over the country. And while many feel our leaders took a leap in the wrong direction, let's hope we're not too far gone as to not be able to right those mistakes.