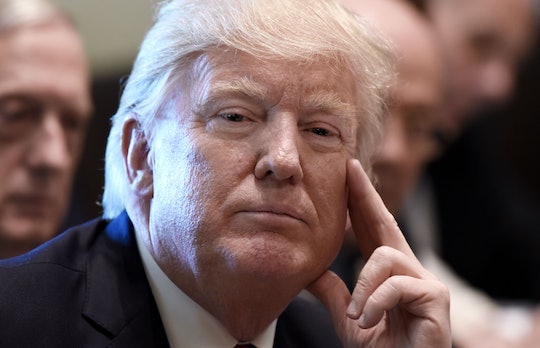 While Donald Trump ran much of his presidential campaign on the prospect of "winning," he hasn't exactly done a lot of that since taking office in January. One of President Trump's first executive orders in the White House was the so-called "travel ban," restricting access for citizens of six majority-Muslim nations into the United States. The ban has already received harsh criticism from experts and politicians everywhere and has already been debated in two appeals courts since its inception. So, will Trump's travel ban go to the Supreme Court? It just hit another major hurdle, but the Trump administration isn't ready to give up just yet.

As of Monday, Trump's travel ban was again found to be unconstitutional by the 9th Circuit Appeals Court, with the court stating, "We conclude that the President, in issuing the Executive Order, exceeded the scope of the authority delegated to him by Congress." The three judges also decreed that "immigration, even for the President, is not a one-person show."

This latest decision upholds a May resolution by another federal appeals court which maintained that the ban was unconstitutional, with both conclusions coming after a thorough review of Trump's statements, including his Twitter feed. This latest ruling is the final verdict before the Supreme Court gets involved in the discourse.

Following the 9th Circuit Court's decision, the next step would be to take the issue of the travel ban to the Supreme Court, something that the Justice Department is already in the process of doing. However, it could take several days for the Supreme Court to even announce whether it will hear the case, although it's likely it will.

On March 6, Trump issued a new travel ban trying to assuage critics who criticized the original order as being nothing more than a "Muslim ban." After that, according to Reuters,

In a tweet on June 5 — days after the "emergency applications" were already filed — Trump insisted that the travel ban had been "watered down," pointing to the fact that the version of the ban being debated wasn't as intense as he believed it should be.

While the Trump administration has argued that the travel ban is imperative to the security of the United States, the 9th Circuit Court is of the belief that the travel ban is discriminatory in its most basic form, as Trump's homogenization of the six majority-Muslim countries as dangerous threats is both incorrect and, in some experts' minds, unconstitutional.

For now, the world waits to see whether the Supreme Court will hear the case itself.

More Like This
Winter Travel Tips For Families
How To Fly Safely During Pregnancy
Keke Palmer Casually Drops Her Baby's Sex On Jimmy Fallon
Does The FDA's Plan To Limit Lead In Baby Food Go Far Enough?
What Parents Are Talking About — Delivered Straight To Your Inbox