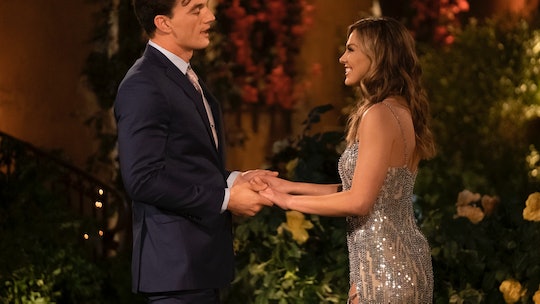 If Tyler Isn't The Next 'Bachelor' Fans Might Riot

With Hannah's season of The Bachelorette coming to an end it's time to think about who will step into the next leading role. Though the two-part four hour finale hasn't yet aired, fans have opinions on who deserves the shot at finding forever love. Before Hannah gives her final rose, viewers are already Googling whether Tyler will be the next Bachelor, but ABC has yet to confirm or deny the rumors.

If you've paid attention to this season at all, you already know Tyler has pretty great odds for snagging the next Bachelor crown (in my opinion). The model, dancing contractor, and former football player is a serious contender among Bachelor Nation, assuming Hannah eliminates him on the finale. Obviously, there can't be an official announcement until the three remaining men (Tyler, Peter, and Jed) are narrowed down to one.

I think America's next Bachelor will come down to Mike Johnson or Tyler (with Peter the Pilot next in line). Aside from Tyler's dancing skills, he made an impression on fans and Hannah alike from his first-one-on one date. Not only did Tyler have the skills to comfort an upset Hannah after Luke P. drama, he always had the right words to support his queen amid controversy (because of more Luke P. drama). As a man who steps up to defend a woman's right to make her own choices regarding her body, and praises whatever choice she makes, Tyler would, no doubt, be one hell of a Bachelor — but he may not want to choose between 30 women. For now, he appears to be all in for Hannah, and Hannah alone. *Swoon.*

Bachelor host Chris Harrison spoke with The Hollywood Reporter while filming the Men Tell All Special saying Mike [Johnson] was part of the network's considerations, "He's a great man and I feel like he's a dear friend of mine already, so he's a great candidate and he's definitely going to be in the mix." When the longtime host drops your name into the hat, you're likely a strong candidate. Since there is no mention of Tyler, it's anyone's guess.

Among other reasons Tyler would make a great leading man (there are many), he doesn't contribute to the drama, but isn't afraid to call people out when they're in the wrong. Remember the whole Cam thing? I admit, a lot of the Bachelor franchise comes down to the way each contestant is edited. Tyler's "story" and the way he comes across in every episode reveals him to be a genuine, caring man. He's one of the more stable, consistent, and mature men on this season with a sense of humor that's honestly underrated.

Still, all of these attributes don't stop fans (like me!) from speculating whether he'll be the next chosen for the next season of The Bachelor one or not. Some pointed out his absence on Season 6 of Bachelor in Paradise speaks volumes, while others look to his recent Instagram posts to investigate where life has taken him post-Bachelorette filming.

All of this to say, there is no clear answer as to whether Tyler will be the next Bachelor. Not yet, anyway. I think he's a great candidate for all the reasons above (and then some), but it's telling that even Tyler's rooting for Mike to take the spot. Still, if Tyler or Mike aren't the top hopefuls, ABC better not pull another Arie Luyendyk out of nowhere (or Luke P. while they're at it). I'll sit back and wait for the two-night four-hour finale to make my final decision, but for now, Tyler should be the next Bachelor and that's the hill I'll die on.