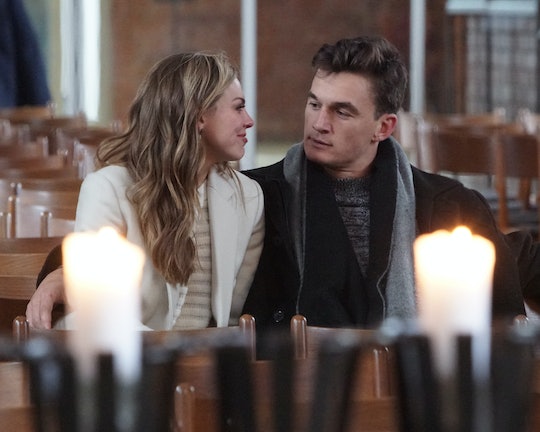 Former Miss Alabama USA is getting closer to finding Mr. Right on The Bachelorette. Season 15 has had its share of drama and controversy over the last few weeks, but there are some definite frontrunners in the competing for the epic hometown dates. I don't want to give anything away in terms of official spoilers — because that would be rude — but some of you are probably dying to know if Tyler will get a hometown date on The Bachelorette.

I'm a huge Tyler fan for more than a few reasons, and while I promised not to give actual spoilers, I do think he'll get a hometown date. I can say this with a 99.9 percent certainty — based on hints from all the episodes thus far. For one, he saved the episode 6 clip show. Hannah's reaction to Tyler's company is a noticeable difference from that of the other guys in the house. There's no denying their chemistry — especially when he wore that kilt — but looking back to their one-on-one date (when Hannah wasn't exactly feeling her best), Tyler was caring and gentle enough to turn it all around. The date ended with a happy Hannah and that, for sure, is husband material. Of all the frontrunners, Tyler seems like the strongest hometown candidate to me.

Speaking of frontrunners, I'd be remiss not to mention the trouble maker of the group, Luke P. Luke has gotten into it with all of the other men and Hannah herself for coming on a little too strong, beefing with the other guys, and general red-flag behavior. But still, Hannah has kept him around — maybe because of their amazing chemistry which is so obvious I bet you can see it from space. However, I don't foresee Hannah putting up with much more if he can't turn things around.

Tyler is the complete opposite of Luke when it comes to maturity; he's the difference between arrogance and confidence. I know Luke has a few good qualities (maybe) but I'd like to think Hannah's starting to catch on to the way he's playing this game.

Drama aside, if Tyler is chosen, he'd take Hannah to meet family and friends, and rescue dog, Harley, in Jupiter, Florida. Sun, sand, and probably some kind of dancing will take place. His ABC bio says he loves to scuba dive, so there might be some underwater kissing action. It also claims he's a fan of skydiving.

As far as who might earn the remaining three spots, I think it'll come down to Peter, Jed, and — sorry — Luke P. Feel free to do your own deep dive investigation and form your own conclusion, however. Tyler may not seem like he's in the top spot, but in the coming weeks I think he'll pick up his stride and push past the finish line.

There you have it, my friends. I refuse to seek out spoilers, but I don't think I need them to call this one anyway. Tyler started strong and has maintained his presence with Hannah at the rate it's supposed to. There wasn't a premature "I'm falling in love with you," or a girlfriend waiting for him back home. He seems like a genuine guy looking for a genuine woman. Apparently the only place to do that is on national television. To each their own.