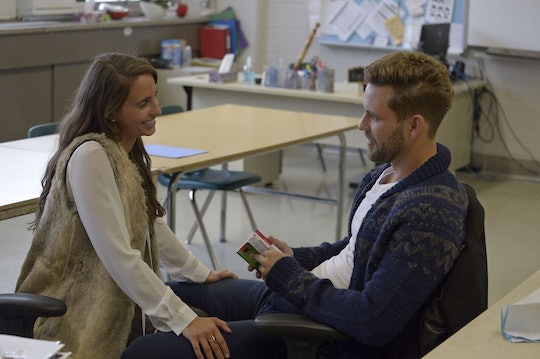 Vanessa's Fantasy Suite date with Nick Viall was by far the most tumultuous of the three. While Raven got a happy-go-lucky maybe orgasm out of the deal, and Rachel had an intimate, connected, and vulnerable overnight date dressed in her best penguin onesie pajamas, Nick and Vanessa honestly seemed to be squabbling the whole time. Granted, they were talking about important compatibility topics, like how they would navigate their transnational relationship in the real world and how deeply involved in their relationship Nick's future in-laws would be. So will Vanessa move to Los Angeles after The Bachelor for Nick now that they're engaged? She seemed reluctant when they discussed it in prior episodes.

One of Vanessa's main points of pride is her closeness with her traditional Italian immigrant/French-Canadian family. (Yes, their accents are perfection.) Nick got a taste of that when he visited them in Montreal during hometown dates, and got to experience their customary three-hour Sunday dinners — a tradition Vanessa feels very strongly about keeping in her life. But that's not exactly possible if she's living in Los Angeles with her fiancé Nick. He also expressed some trepidation about her closeness with her family, because, even though he comes from a family of 11 himself, he self-identifies as "non-traditional." (Perhaps because he comes from a family of 11, he's not exactly about that life.)

On their Fantasy Suite date, Nick confided in Vanessa that he had previously dated a women who was very close with her family, which led the family to be very "present" in the relationship. It was a kind and diplomatic way of saying that her family was all up in their business all the time, probably being excessively judgey and/or offering unsolicited advice and opinions, and it took a toll on the relationship. It's clear that Nick is seeking to avoid that in the future by finding someone whose family respects and accepts their relationship enough to butt out.

Vanessa's family was super overbearing when it came to the practical elements of Nick and Vanessa's would-be engagement, which is understandable, considering that it seemed like the couple hadn't discussed it at all. But it also seems like that gave Nick a whiff of his old nosy in-laws problem. Back in January, Vanessa told Glamour that she'd be willing to relocate if she found love. It looks like she was finally able to compromise on the point of Canadian pride and settle in the States with Nick.