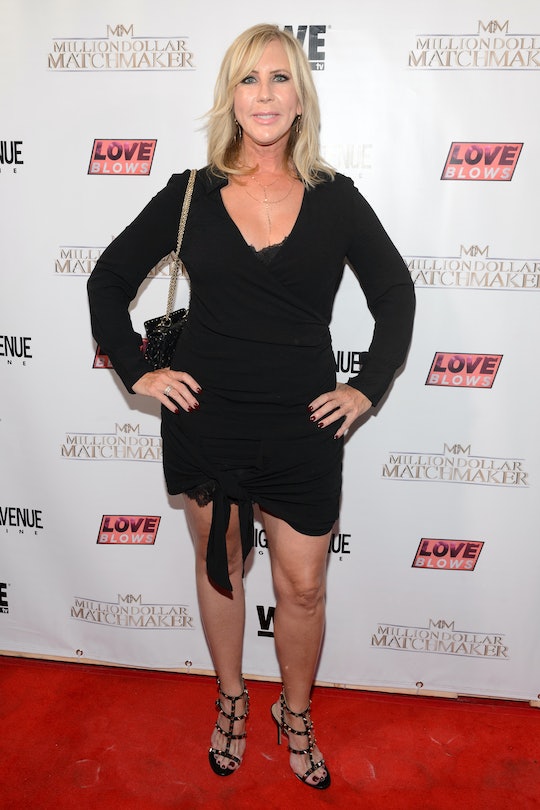 Vicki's Role On 'RHOC' Has Changed In Season 14

Vicki Gunvalson earned the title of O.G. of the O.C. for a reason. As an original cast member of The Real Housewives of Orange Country, she's been a part of the Housewives franchise since its inception. But things will be a little different on the upcoming season of RHOC, which premieres on Bravo on Aug. 6. Vicki will be on RHOC Season 14, but for the first time she won't be a Housewife. She'll be a Friend Of the Housewives.

There is a distinction between the two roles, though it may not feel like it when you're watching the new season. Being a Friend Of is technically a demotion; you won't see Vicki in the opening credits as per usual and she won't be holding an orange aloft behind the title. But she will still be a part of the show, as she revealed on Instagram. "I am back again this season right in the middle of the action, and I hope you have as much fun watching the show as I did living it in front of the cameras," Vicki wrote beside a series of promotional photos from Season 14.

Vicki's position in the show might have changed, but it sounds like her presence will still be felt.

During an appearance on E! News, Kelly Dodd was asked about Vicki's demotion, but she didn't have any concrete answers. She said that kind of thing was for the Bravo executives to decide and had nothing to do with her; however, if she had to speculate, she thought it was possible that Vicki didn't have enough "personal story" to warrant continued Housewife status. But she made it clear that was only her personal opinion on the matter. And she assured viewers that Vicki was still on the season quite a lot.

If that theory is true, then it could make sense. The women have their joint storylines, which include all manner of vacations, spats, and everything else that comes with TV friendship. But they also have individual storylines that follow their lives at home with their families. It's possible that Vicki worked best in the group, so it made more sense to focus on her in that capacity rather than on her own. However, king of Bravo Andy Cohen had another explanation while talking to Us Weekly.

"The truth is we're always looking to freshen up every show," Cohen said. He called Vicki's 14-year run on RHOC "unprecedented" and said that if he had his way, she would be on the show for another 14 years. He emphasized that she was "very much a part of this season" and insisted that her demotion was "just about keeping everything fresh."

That makes sense, too. A show as long-running as RHOC needs to change things up now and then so it doesn't become staid. Perhaps that's all this is. Regardless of the reason behind Vicki's demotion, it sounds like she'll be as involved in Season 14 as she was in every season that came before.