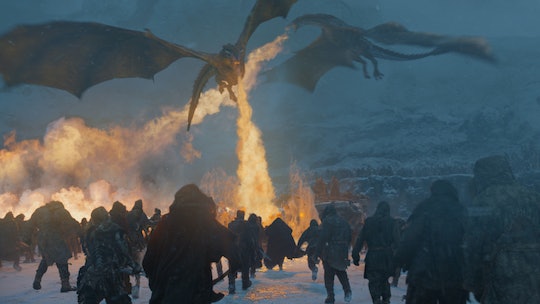 For thousands of years the Wall has protected Westeros from those who live North of the Wall. When Jon first joined the Night's Watch, the biggest threat was thought to be the Wildings, but now it's become clear it's really the White Walkers the Wall is protecting everyone from. Though the foundation has lasted for years, Jon is worried that the Night King will somehow bring it down. And considering he currently has a dragon on his side, it seems Jon may be right. So will Viserion bring the Wall down on Game of Thrones? It depends on whether or not this creature is actually an ice dragon.

When it comes to the world author George R. R. Martin created in his books, ice dragons are actually their own species of dragons. Unlike Daenerys' dragons, they "supposedly breathe cold, a chill so terrible that it can freeze a man solid in half a heartbeat." Therefore, Viserion may not actually be an ice dragon, but a wight dragon. If that is, in fact, the case then Viserion may still have the ability to breathe fire and his fire would certainly be strong enough (and hot enough) to melt the Wall down, which may have been the Night King's plan all along.

That being said, the show has veered away from the books before, and it's possible the series is combining the idea of a wight dragon with that of an ice dragon, making them one in the same. If that's the case, Viserion may actually breathe ice now, which you'd think wouldn't help the Night King bring down the Wall. (Wouldn't adding more ice to the Wall only help the Night Watch's cause?) Viserion could fly over the Wall, though, which would still be a bad outcome for all of Westeros.

Still, it seems much more likely that Viserion will still breathe fire and that's how the Wall will finally fall, as fans knew one day it would. Otherwise, what's really the point of turning a dragon into a wight, other than it's cool and he could freeze people? For the sake of the plot, it would make much more sense that Viserion is still a fire breather and help the army of the dead get that much closer to total world domination.

If the Wall really does fall, what does that mean for everyone living down south? Well, it'll certainly make the War of the Five Kings seem pretty inconsequential. The Night King has already built a tremendous army; if there's no Wall standing in his way, it'll be rather easy for him to take over the world of the living, destroying it completely. Let's hope it won't come to that. The poor Starks have been through enough already.