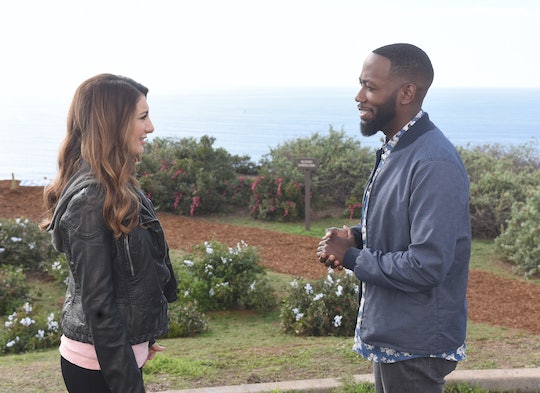 Another 'New Girl' Wedding May Be On The Way

It's been six years since New Girl began and fans have watched this motley crew of characters come a long way. Cece and Schmidt are now married and working on their house so they can move out of the loft; Nick has finally finished his novel; Jess is now teaching at a school she loves; and Winston is in a serious relationship with his girlfriend Aly. Well now it looks like Winston is ready to take the next step in his relationship and fans are wondering will Winston and Aly get engaged on New Girl?

This season fans have watched Winston and Aly overcome the hurdle of a long distance relationship and Winston even met Aly's entire family during a recent episode. Although they haven't lived together, Winston is apparently prepared to jump on ahead to marriage. In the description for Tuesday's new episode, "Glue," it states that "Winston seeks Cece and Schmidt's help in his surprise plan to propose to Aly."

This proposal is definitely a surprise since the last time Winston talked about getting married was when he accidentally got married to his ex, Rhonda, as part of a prank that turned out to be very, very real. It's unclear what causes Winston to decide to take this jump forward in his relationship, but knowing Winston he probably hasn't thought this plan all the way through.

Thankfully, he'll have Cece and Schmidt by his side and hopefully they can help him do this right, if getting engaged is truly what he wants. Winston and Aly have come a long way since they first met as police partners. They are very cute and I'd love to see them take the next step in their relationship, but are they actually ready for this? Fans will just have to wait and see.

The new episode will also find Jess stuck in the middle of Nick and Reagan's relationship once again, despite the fact that Jess is supposed to be staying out of it because of her lingering feelings for Nick. No doubt, Jess' recent break-up with Robbie will only make this situation even more complicated and messy. Maybe a Winston and Aly wedding is just the type of setting Nick and Jess need to get those sparks flying again. Hey, you never know!

You can see all the fun drama unfold when New Girl airs on FOX on Tuesday, Feb. 7 at 8 p.m. ET.