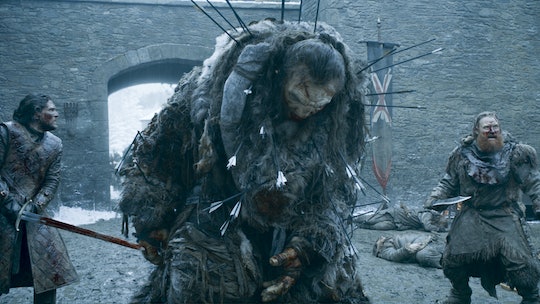 Wun Wun May Not Be Among The Walking Dead After All, 'GoT' Fans

After the season premiere of Game of Thrones, fans have been left with a lot of questions about what's to come this season. One big question people can't stop asking is will Wun Wun appear on Game of Thrones again? Many viewers seem to think he already has. During the premiere, Bran had a vision where he saw the White Walker army marching south and it seemed to have grown in numbers. Not only did the White Walker king, aka the Night King, have an incredible number of wights with him, he also seemed to have collected a few giant wights as well. One that caught the attention of viewers was a giant with one eye that was a bright blue color.

The single blue eye has led many theorists to believe the giant was Wun Wun, who died in Season 6. During the Battle of the Bastards, Wun Wun fought valiantly and just when Jon made eye contact with him, Wun Wun was fatally shot in the eye with an arrow by Ramsey Bolton. Wun Wun then fell down dead, and hasn't been seen since. Or has he?

Fans are confident that the giant wight is Wun Wun, but it seems a bit implausible to me. Jon knows firsthand what happens when you don't burn a body, so it seems unlikely that he wouldn't have burned all the bodies that were left from the Battle of the Bastards. Unless giants are somehow an exception to this rule?

More importantly, Wun Wun died south of the wall. Sure, Winterfell is pretty far north, but it's still south of the wall. How could Wun Wun be resurrected and somehow make it on the other side of the wall without anyone noticing? Well, there's one theory that could explain that.

What if Bran's vision was actually a vision from the future and the White Walker army actually crosses the Wall into Winterfell. That's how Wun Wun is able to become a wight and join the army. Still, that would mean Jon didn't burn the body and that just seems out of character for Jon, who knows better than anyone how important that is.

Therefore, it looks like that was probably another giant and Wun Wun won't be coming back this season. And truthfully, that's a good thing. It'll be difficult enough for Jon and everyone else to battle this army of White Walkers and wights. The task will only become more difficult if they have to face people they once cared about.

What Bran's vision really showed is that Jon is right. While everyone's focusing on the war in King's Landing, they really should to be focusing on the war coming from beyond the Wall, because it appears it's coming much sooner than they think. If Jon isn't able to get the dragonglass he needs to make more weapons and prepare fighters to face the army of the dead, it'll be the Night King who takes the Iron Throne for himself. And that's a very chilling thought.