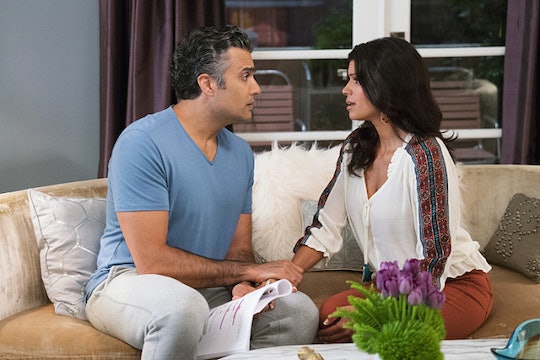 Xo & Rogelio Could Still Be Endgame On 'JTV'

Just like on any telenovela, on Jane the Virgin there's murder, fighting, and of course, love triangles. While the show's best love story may be over now (RIP Michael), there's still one love story that many fans are hoping continues. Jane's parents reconnected when Jane discovered who her father was and since then, they've dated, fallen in love again, but ultimately split because while Xo didn't want any more kids, Rogelio definitely did. Now Xo has reconnected with another ex, Bruce, but will Xo and Rogelio get back together on Jane the Virgin? There's definitely still a chance.

After the three-year time jump, Xo and Rogelio were estranged due to the fact that Xo was portrayed on Rogelio and Darci's reality show as a psycho ex-girlfriend. However, after Rogelio apologized and claimed he didn't know the show was going to present Xo that way, she forgave him and they finally moved past it. For a short while, anyway. Then Darci, who wanted to add more drama to the show, sent Xo a video that proved Rogelio actually knew about the "psycho ex-girlfriend" bit the whole time, but let them do it anyway. This, of course, caused another rift between Jane's parents and unfortunately for Rogelio, an apology basket wasn't going to cut it.

Instead, Rogelio went to Xo with a heartfelt apology. They talked about what went wrong in their relationship and Rogelio admitted that after she moved in with Bruce, he wanted to hurt her, which is why he let the producers portray her as the "evil ex." Then there was definitely a special moment there between the two of them before they were interrupted. After that, Rogelio promised to quit the show for real this time, which he did. However, he then got sued for $10 million for breach of contract. Yikes!

Lawsuit aside, it was great seeing Rogelio and Xo reconcile and it's obvious Rogelio still has feelings for his former flame, but does Xo still have feelings for him? And what about the baby issue? Rogelio said he purposefully didn't end up having kids with Darci because it didn't feel right, but does that mean he'd be OK with not having any more kids at all?

Before Xo got back together with Bruce, Rogelio was definitely willing to make that sacrifice. For him, if it was a choice between being with Xo or having kids, he was ready to choose Xo. Sadly, he then saw her kissing Bruce at her dance studio and the hopes of them rekindling their romance ended before it ever really got started.

However, Xo and Bruce have been together for three years and he still hasn't put a ring on it, so there's definitely still a chance for Xo and Rogelio. Hopefully Xo realizes Rogelio's really the one for her, sooner rather than later.