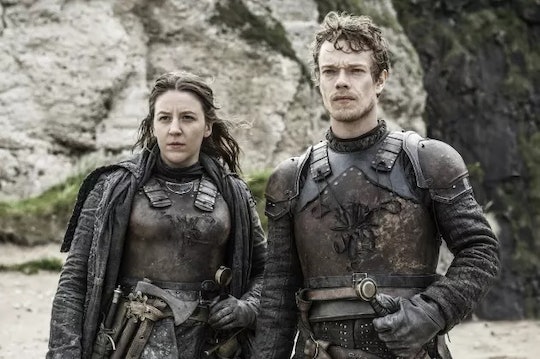 Will Yara & Theon Meet Daenerys On 'Game Of Thrones'? It's In The Best Interest Of All 3

When Yara and Theon stole their family's fleet of ships like a couple of kids going on a joy ride, their Uncle Euron was ready to find them and kill them, in the literal sense. But since their goal is to get to Daenerys Targaryen before he does and gain her trust, things are a bit more complicated now. So, will Yara and Theon meet Daenerys on Game of Thrones? It would be best for all three of them, since Dany needs ships in order to take over Westeros and the iron throne. Of course there's nothing stopping Daenerys from just taking the fleet from the two Iron Island heirs, since she is all about that conqueror life, but if they can get to her before their awful uncle does, then she'll no doubt at least hear them out.

As it is, Daenerys can stand to build some alliances instead of, you know, just taking everything and everyone she meets when passing through a new land. That being said, if Yara and Theon can get to her, they may be able to build a mutually beneficial alliance that would be more than just a treat for viewers. It's taken long enough for any of the Westeros players to come into contact with Dany (Tyrion and Varys), but now that she's met them, having Daenerys meet Yara and Theon on Game of Thrones is another good way to ease her into the fray. Until Season 6, Daenerys has been far from the home she was born in and far from her true people, and meeting with Yara and Theon could help usher her back.

Will they get to her before Season 6 is over? That could totally happen, but with the wars and battles to come, it may be a meeting that has to wait until Season 7 of Game of Thrones arrives. Which is an awful thought since there is no one who wouldn't love to see the Greyjoy siblings meet the Mother of Dragons, especially before Euron gets to her. It would give us something to look forward to, though, right?

It's a scary thing to think that they would travel with their stolen fleets and army, only to be bested by their killer uncle and die along the way, so I have to believe that Yara and Theon will meet Daenerys and build an alliance to mean something big in the wars to come.