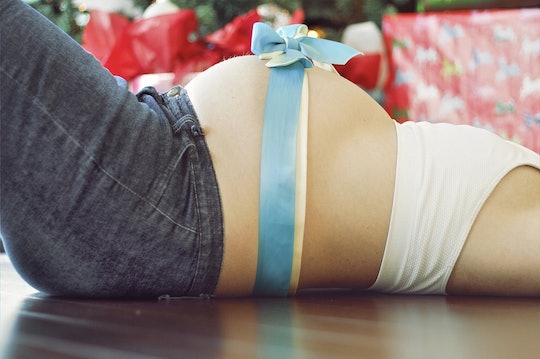 Will You Always Have A Bloody Show Before Labor?

I've never been very patient. More than once, I have flipped to the back of a book to see how it ends — even when it was my month-by-month book on pregnancy. If you've ever read through a pregnancy book, you may have noticed that there are some pretty descriptive names for certain things that happen in those 40 weeks. You can imagine my surprise when I read about the "bloody show," a sign that labor is beginning. I started to hope this was something I could pass on and wondered: will you always have a bloody show before labor?

As I read on and learned more, I discovered the actual occurrence is not near as bad as the name sounds. (Because it really does sounds like a slang term for a horror movie.) According to What To Expect's website, bloody show is "a stringy mucus discharge that’s tinged pink or brown with blood." But it's no cause to be alarmed. This is perfectly natural and is your body's way of telling you that your cervix has started to open up and prepare for that sweet baby to join the world. However, if you do experience bloody show, don't rush to the hospital just yet.

Although bloody show is a sign that your body is preparing for labor, it may be days (even up to a week) before you actually deliver, as the National Library of Medicine pointed out. For the duration of your pregnancy, your body creates a natural barrier, called a mucus plug, to protect your cervix. As the American Pregnancy Association explained, the mucus plug keeps bacteria out of the uterus by blocking the entrance to the cervix. When it's time for your uterus to begin expanding for labor, out pops the mucus plug, and with it, some bloody show. But it's important to know exactly what to look for, since it's possible to experience bleeding that is not part of a bloody show, according to Mayo Clinic. Heavy bleeding is always a sign to call your health care professional.

Even though every pregnant woman has a mucus plug, not everyone sees a bloody show. As Healthline pointed out, every woman is different, and while some women may notice bloody show before labor, some women do not even loose their mucus plug until they are in active labor. It is also important to note that since the cervix contains so many blood vessels, it's common for light bleeding to occur as you get closer to delivery. If you are one of the women who sees a bloody show before labor, remember to stay calm. You don't need to call your doctor or midwife until you are in active labor, as Parents pointed out.

Although you may not discover your bloody show before you begin delivery, it's one of those pieces to pregnancy that it's better to know about ahead of time, instead of having it come as a surprise. If I had not flipped to the back of my pregnancy book and learned what bloody show was, I probably would have panicked at the site of some blood in my undies. Knowing all the possibilities is always better — even if some things are not universal — so you can be in charge of your pregnancy and proactive in your healthcare.