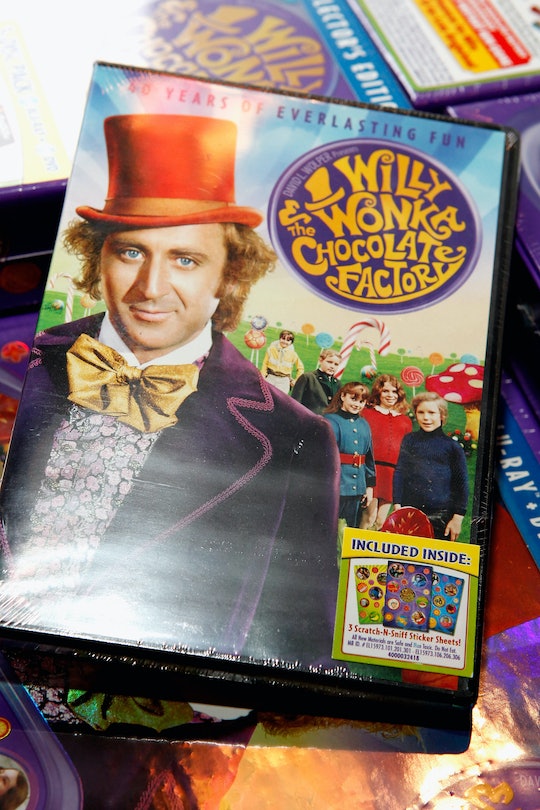 The news of actor, director, and screenwriter Gene Wilder's death has cast a pall over this last week before Labor Day. Still though, Wilder left behind a great deal to make us smile; Indeed, according to a statement from Wilder's nephew published at Variety, Wilder "simply couldn’t bear the idea of one less smile in the world," which was why he withheld the news of his illness with Alzheimer's from fans for so long. With that in mind, it's well worth your while to take a trip down memory lane, because Willy Wonka clips of Gene Wilder are sure to make you smile — exactly as he would have wanted it.

Wilder, who passed away on Monday at 83, played many celebrated roles throughout his prolific career — but none will have quite the staying power in the cultural imagination as 1971's Willy Wonka & the Chocolate Factory, in which Wilder played a deranged confectioner who hosts a coterie of children on a tour of his eccentric chocolate factory. Wilder's characterization of Willy Wonka was so successful in part because the source material, Roald Dahl's Charlie and the Chocolate Factory, behooved an actor with Wilder's intensity and subtle humor. Wilder's portrayal stole the show — although Dahl reportedly disliked the film for that very reason. "He thought it placed too much emphasis on Willy Wonka and not enough on Charlie," Liz Attenborough, trustee of the Roald Dahl Museum and Story Centre, told BBC News in 2005.

With Wilder's memorable performance, though, it was impossible for the film to not be about Wonka. In this clip from the film, Wilder-as-Wonka brings his guests into the chocolate room with the sinister gravitas of a crypt master introducing a morgue. But rather than doom and gloom, the children are greeted with edible frosting flowers and a chocolate fountain. "Come with me, and you'll be in a world of pure imagination," Wonka sings. Never have pure delight and sheer terror been so perfectly wed.

Like all of the best children's films, Wonka is both fantastical and terrifying. It defies hardbound rules of the genre by featuring an anti-hero (Wonka) who doesn't like most of the film's child characters, and really does intend them bodily harm.

According to The New York Times' obituary of Wilder, Wonka didn't succeed at the box office (despite attaining cult status later) "in part because of parental concern that the moral of Roald Dahl’s story — greedy, gluttonous children should not go unpunished — was too dark in the telling."

One of these greedy, gluttonous children was Veruca Salt, who famously sang "I want it now! I don't care how, I want it now!" before disappearing down a garbage chute intended for eggs. "She was a bad egg... she went where all the other bad eggs go. Down the garbage chute," Wonka calmly explains. In most children's films, this is the point where Wonka grins and says that actually, the chute leads to a cotton candy trampoline. But not Wonka. Instead, he explains that she and her father, who jumped in after her, might be dead: "Hmm, well I think the furnace is lit only every other day. So they have a good sporting chance, haven't they?"

Things don't fare better for many of the other children in the chocolate factory. Among other fates, one gets miniaturized, one nearly drowns an ironic chocolate incident, and even the beloved Charlie is nearly sliced into pieces by a ceiling fan.

And how can we forget Violet Beauregarde, the irksome tween who turned into a blueberry after consuming an eight-course-dinner piece of gum. "It always goes wrong when they come to the dessert. Always," Wonka muses, totally nonplussed.

It seems clear that the Wonka role remained close to Wilder's heart, even decades after the film. In his statement to the press, Wilder's nephew, Jordan Walker-Pearlman, referenced the role as influencing the family's decision to not speak publicly about Wilder's struggle with Alzheimer's (reportedly, the actor died from complications of the disease). Walker-Pearlman wrote,

The decision to wait until this time to disclose his condition wasn’t vanity, but more so that the countless young children that would smile or call out to him “there’s Willy Wonka,” would not have to be then exposed to an adult referencing illness or trouble and causing delight to travel to worry, disappointment or confusion. He simply couldn’t bear the idea of one less smile in the world.

Towards the end of Wonka, the genius of Wilder's performance hits its apex during a confrontation between Wonka and Charlie's beloved grandpa. Wonka cruelly refuses to provide Charlie with his previously promised lifetime supply of chocolate; He kicks the impoverished pair out of the chocolate factory. But they then "pass the test," presumably because they accept being swindled with integrity.

It turns out, then, that Wonka was being super mean just as part of a manipulative test—another instance of Wonka being flawed and kinda nutso, just like a real adult. According to The Times, Wilder's comedy worked according to a unique, perennially successful formula: "Don’t try to make it funny, try to make it real."

And surreal as the Wonka film was, Wilder's portrayal of the title character was as real as it gets — which is why children and adults still love the film all these years later.