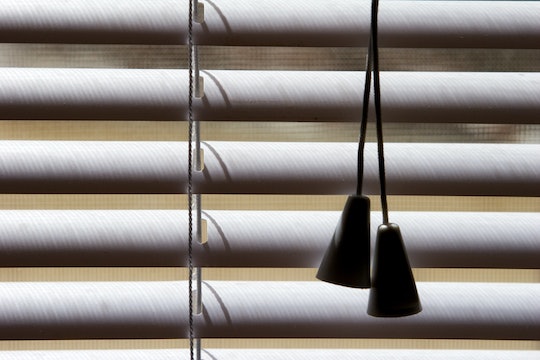 Kids Are Still Dying Because Of Window Blind Cords, & Parents Need To Take These Precautions

One of the things that quickly becomes clear as soon as your child is able to walk and climb is just how many everyday household objects have suddenly become incredibly dangerous. Walk through a babyproofed home, and you'll likely see locks on cabinets, plastic covers in every outlet, baby gates galore, and a toilet seat contraption that feels frustratingly complicated to navigate when you have to go pee in the middle of the night. If there are any blinds in the house, chances are the cords will be tied up and out of reach of little hands, but a new study shows that window blind cord strangulation continues to be a major threat to children despite years of warning parents to go cord-free. And while tying up loose cords might seem like it would be a good compromise, the reality is that it's just not enough to keep young children safe.

Although the strangulation risk posed by window blind cords has been known for decades, corded blinds continue to be much more popular than cordless varieties, even among parents with small children. Yet, according to NPR, a new study published in Pediatrics Monday illustrates that, even when parents take added safety measures like tying up the cords or purchasing only single-cord blinds, corded blinds just aren't worth the risk.

Researchers from the U.S. Child Injury Prevention Alliance, the Ohio State University, and the research institute at Ohio's Nationwide Children’s Hospital looked at data from the National Electronic Injury Surveillance System (NEISS) and the Consumer Product Safety Commission (CPSC) to analyze the injuries reported as a result of cord blinds to children under 6 between 1990-2015. What they found, according to The Guardian, is that nearly 17,000 children in that age group were treated in hospital emergency departments for injuries relating to window blinds or shades.

The good news, at least, is that most of the injuries were minor, involving cuts and bruises from young children being hit by the blinds. But there were also 271 deaths related to blinds, and the overwhelming majority of them occurred after children became entangled in the cords. That's nearly one child every month for the past 26 years — a harrowing statistic — yet researchers estimate that the actual figure is likely even higher, given that not all injuries are reported to the NEISS (particularly fatalities that don't involve trips to the emergency room).

Children between the ages of 1 to 4 were most likely to be involved in a window blind accident, according to NPR, but the CPSC says that corded blinds actually present a risk to children as old as 9, according to TODAY. Most accidents occur while children are meant to be sleeping or napping — aka, when we assume it's fine to leave kids unsupervised — and when children have their heads and necks caught in cords, they obviously can't yell out for help. What's more is that, as Colorado mom Andrea Sutton explained to NPR, children caught in corded blinds often lose consciousness in under a minute, due to lack of oxygen. And unfortunately, she knows from experience: Sutton's own son, Daniel, died after becoming entangled in corded blinds in his bedroom during nap time, despite the the fact that she'd tied the cords up as a precaution.

The Pediatrics study concluded that "a mandatory safety standard that eliminates accessible window blind cords should be adopted," and it does sound like the tide is finally changing. Paul Nathanson, spokesman for the Window Covering Manufacturers Association, told ABC News that by "late 2018" corded blind products will no longer be available in stores and online, meaning that cordless blinds will be the only option for consumers, unless they specifically purchase corded blinds through a custom order.

Yet while the updated safety standards are encouraging, it still won't do anything to address the fact that millions of corded window coverings remain in homes and childcare centers across the country. And while it may be easy to simply expect parents to go out and buy new blinds, the truth is that the expense is often an obstacle — particularly for those subsidized housing, or in rental properties, where tenants are often not allowed to replace blinds, even if they want to.

For those who don't have the option to go completely cordless, experts suggest at least removing corded window coverings from children's bedrooms, and, if possible, in high-traffic areas like living rooms. If that's not doable, the Window Covering Safety Council recommends that parents attempt to retrofit their window coverings to make them safer — instructions for retrofitting a variety of window coverings can be found on the organization's website, along with a link to order a free retrofit kit.

As horrifying as the prospect of blind cord strangulation really is, the reality is that it's also really easy to assume that it won't actually happen in your house, or to your kids. Many of us would like to think that if we just keep an eye on our children, and if we tie the cords up and remind our kids to stay away from them, it will be enough. But the data backs up something far too many parents who have lost children to blind cord accidents already know: that deaths can and do happen, and that the risk is entirely preventable by going cord-free.