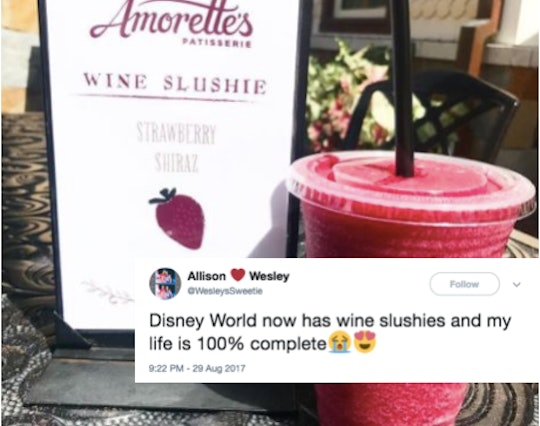 Wine Slushies Are Officially In Disney & They Look AMAZING

I was jazzed enough when I heard Disney started dishing out gluten-free pastries. As someone who has celiac disease, I thought I could officially call my next trip to Orlando complete. And then today I heard about Disney Springs' latest magical arrival: wine slushies. I will pause for reaction. Talk about the happiest place on earth, huh? That's right — wine slushies are officially in Disney. Yesterday, Disney Food posted a photo of a gorgeous pink slushie atop a table at Amorette's Patisserie in Disney Springs and everybody everywhere uttered a collective squeal.

Available in strawberry shiraz and mango moscato, the slushies have already started popping up on Instagram (now would be the time to take back what you said about people who take pictures of their food) and they look quite refreshing. Not only will they help beat the Florida heat, but a few sips might prove a solid way to relax after navigating huge crowds all day. It doesn't hurt that Amorette's also serves up chocolate covered strawberries, New York-style cheesecake, crepes, and French eclairs, according to the Disney Springs website. You know where to find me.

It's not the first time Disney has served alcohol at one of their properties. Several restaurants in the Magic Kingdom serve everything from Italian beer to cider to champagne, and visitors to Animal Kingdom, Hollywood Studios, and Epcot, have been a little Buzz-ed Lightyear for years.

Serving alcohol wasn't exactly what Walt Disney had in mind when he created the parks. According to the Orlando Sentinel, Disney was adamantly against alcoholic beverages in the park for "fear that people would become unruly." But seeing as how he also couldn't have foreseen the lines for Splash Mountain, Scott Smith, an assistant hospitality professor at the University of South Carolina in Columbia, South Carolina, told the Sentinel that “I don’t think Walt (Disney) is going to be spinning in his grave as long as it's done tastefully."

And, oh, I think everyone can tastefully have a wine slushie, am I right?

Of course, if you aren't heading to Disney anytime soon, then there's a way to have your wine slushie and stay at home with your favorite Disney flick. Try these DIY recipes for slushies, like Orange-Peach Mimosa and Blackberry Merlot, pull up a lawn chair, and supercalifragilisticexpialidocious yourself to unwinding.