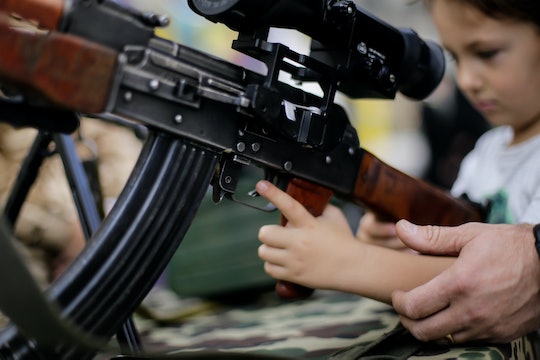 In an absolutely ridiculous piece of legislation that no sensical person — but especially not a well-educated lawmaker — could have possibly asked for, Wisconsin has eliminated its age restrictions for guns, in case you wanted to take your baby hunting this season. According to Think Progress, the state's old law allowed 14-year-olds to hunt alone after passing a safety class, but children as young as 10 were allowed to hunt with a "mentor." The new law lets adults mentor hunters of any age, without training, and also eliminates the previous limit of one "hunting device" per mentor and mentee, meaning a parent can juggle any number of rifles while their toddler is also handling a loaded weapon. Sounds like a great plan, said absolutely nobody.

Wisconsin State Rep. Rob Stafsholt, who sponsored the bill, argued that parents should decide when their child is ready to hunt, "and not the government," although nobody seems to have an issue with the government deciding when a child can operate a motor vehicle, something that, it should be noted, was not strictly designed to kill. "To me, it would be hard to argue that somehow using a gun is less dangerous potentially than a boat or a car, so it just seems inconsistent," David Chipman, senior policy adviser for Americans for Responsible Solutions told Think Progress.

Proponents of the bill claim that it's "important not to lose the state's hunting heritage," according to Portage Daily Register, but in fact, the number of licensed hunters in Wisconsin has remained steady for the last decade, and during the first three years of the mentorship program, the number of 10-year-old hunters grew from about 19,000 to more than 31,000. The actual effect of the new law will be to indoctrinate children into gun culture as young as possible, or, as the NRA's lobbying arm phrased it, to "expand hunting opportunities to the most important group of future hunters – our youth."

But can a child that young even handle a gun? According to Guns & Ammo, kids lack the physical strength to hold heavy guns, and recoil can be painful, leading to a "truly miserable and disheartening experience." That's why the mag recommends guns specifically designed for children. Yes, that's a real thing. Keystone Sporting Arms, a company whose mission is to "instill gun safety in the minds of youth shooters," specializes in children's guns, and offers kiddie rifles in a variety of fun colors like pink, purple, and the very patriotic Second Amendment print.

The NRA's family blog advises parents to allow their kids access to weapons "When the child demonstrates good behavior, reasoning and self-control," which it naively assumes happens around age 6, but according to the University of Rochester Medical Center, the rational part of the human brain isn't fully developed until age 25. And even if we're talking about a very mature kid, according to the American Academy of Ophthalmology, kids don't even have the ability to focus both eyes on a single object until they're about 7, so no matter how smart and level-headed your kindergartener may be, they're not going be an expert marksman for at least another couple of years.

A recent study by the Children’s National Health System shows that regions of the United States with the strictest gun laws have the lowest rates of childhood firearm injuries. "Firearm-related injuries are a leading cause of injury and death among children and represent a significant public health concern," senior study author Monika Goyal, M.D., M.S.C.E. told Science Daily. Among children aged 6 to 10, 81.4 percent of firearm-related emergency room visits are due to accidental injuries. And if you think this is just a Wisconsin problem, think again: there is no federal law prohibiting children from using firearms, according to the Gifford Law Canter, and only five states and the District of Columbia completely bar children from possessing guns. Click through to find out if your state is one of the 45 other ones, and if so, call your legislator to ask why.