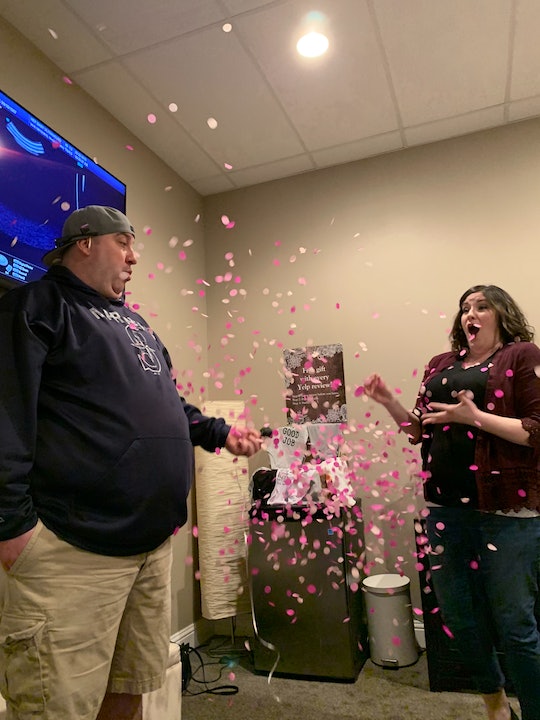 I Had A Pregnancy Complication, But I’m Trying To Focus On Being Present

Jessie has been married for three years and trying to conceive for one year. This is the twelfth installment of her Trying diary. You can read the previous entry here.

“Uh, I’m bleeding…” I text my husband at 10:30 p.m. on a Friday night while he is at work. He calls as I’m throwing up in our bathroom sink and I try to answer his questions through hysterical sobs. “Okay, put your brother on the phone, we need to find the emergency phone numbers for the maternity center.” I compose myself as best as I can, and try to silence the fear and doubt for at least a few minutes to explain to the nurse what’s happening. After being on hold with the nurses line, I’m told that it could be nothing, but because of the cramping and bright red blood, they need me to come in and be seen. I had definitely overexerted myself at work that day, and it didn’t hit me until I had arrived home that night. The half-hour drive to our hospital I kept replaying my day over and over in my head, verbally abusing myself for not taking better care of us both.

At 23 weeks, and about one week out from what some in the medical community consider viability, I had started to feel like things might be actually be okay for us — if only for a little bit. Everything was starting to bump out and swell in the appropriate places, and although I was more easily tired and my morning sickness had not subsided entirely, we were feeling like we were mostly out of the woods for baby’s viability and safety until closer to go time. What I had failed to realize in my second trimester glow (which as it turns out was actually just sweat) was that when it comes to pregnancy and having children, we are never truly out of the woods.

After hooking me up to machines to track her movement, we breathed a collective sigh of relief as her heartbeat showed up on the monitor within normal range, and it was evident that she was grooving and bopping around in there, seemingly unconcerned with whatever bleeding or stabbing pain was occurring. A few more tests were ordered, but after the doctor assured me that my workday had not in fact caused me to bleed, but instructed me to r.e.s.t., we were sent on our way.

Unbeknownst to us, around that same time in a different hospital, our closest friends were having their own complications. It isn’t my birth story, so we won’t discuss details, but I will share that that same night our friends were rushed into emergency surgery to delivery their son via c-section. All is well now, but for those few minutes of unknown, our friends got their own incredibly harsh reminder that you can have the most textbook pregnancy, but birthing is its own mountain to conquer entirely with so many moving parts and variables that you can never fully be prepared for what’s going to happen.

There were so many times over the past three years that it was difficult not to lose hope, or to give up altogether.

It has been a year of this project with Romper, and although my husband and I as expectant parents are in a much different position than when it began, we are still filled with just as much uncertainty and anticipation as we were the day that I flew to New York to meet my fellow Tryers. This past year has been a definite rollercoaster of emotion, but the overwhelming amount of support we've received has been a constant. This wasn’t an easy story to share, and there were times when I felt a physical ache trying to come up with the words to describe this journey through infertility. I’m not sure that I would have had the courage to share this on such a public platform alone, and I’m forever grateful to the four other women that were there with me to share these experiences.

There were so many times over the past three years that it was difficult not to lose hope, or to give up altogether. This process of sharing this deeply personal side of ourselves and this process over the past year has brought support from our fellow trying community, friends and family, as well as complete strangers, and I found our strength and faith to keep trying was replenished month after month.

Our daughter will be here in August, and we don’t know what will happen for the duration of our pregnancy, or during her birth. Right now, we know how much she is already so incredibly loved by so many. If there are people in the trying community that are reading these stories for the first time, I hope that when they start to lose that piece of themselves that drives them forward, that they are able to find whatever it is that renews and replenishes their hope.

We focused so much on getting pregnant for so long that somewhere along the way we latched onto the idea that everything would be okay once we had those two lines.

Now we’re going to try and focus on being present, and remembering that our next steps will also bring a lot of worry and doubt, and that’s okay. Armed with our renewable hope and energy sources, we now recognize that even though we aren’t even close to being out of the woods, the view in this forest is pretty spectacular.

More Like This
OB-GYNs On How The End Of Roe Changes How They Can Care For Us
Barre Could Be The Low-Impact Prenatal Workout You Need
I Found Gender Euphoria In My Second Pregnancy
Can You Bowl While Pregnant? Experts Weigh In