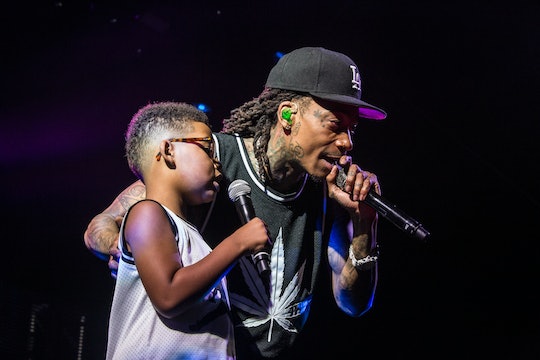 Despite his busy schedule and famous face, one celebrity dad has made it a priority to help coach the baseball team his 6-year-old son plays on. During a recent interview on The Kelly Clarkson Show, rapper Wiz Khalifa shared why coaching his son's baseball team is so important to him, and how his celebrity status has been received by the other coaches.

"For me, it's super important," Khalifa told Kelly Clarkson of coaching his son Sebastian's baseball team. "I love children and this is the most important time in his life. Especially spending it with me, and having his friends and the relationships that they're gonna build — any hand that I can have in that, I'm trying to do it." According to a series of photographs Khalifa recently shared on his official Instagram account, Sebastian plays baseball on a team called the Dodgers.

And although many would instantly recognize Khalifa as a rapper behind "Black and Yellow," "Young Wild & Free," and "See You Again," he told Clarkson he'd managed to keep his celebrity status relatively hidden from the other coaches until just recently. "It's crazy but one of the coaches actually came up to me — he's a fireman — and he just told me this yesterday, he was like, 'I was watching TV and I saw this interview with you on there and I was like, 'What the heck is the Dodgers' coach doing on TV?'' He didn't even know I was a rapper," Khalifa said. "It's cool becauseI felt like maybe I'm doing such a good job as a coach he didn't even know I'm a rapper."

Sebastian is Khalifa's only son with ex-wife Amber Rose. While both of Sebastian's parents have careers that often put them in the limelight, they've previously said they're eager to allow their son to experience normal childhood experiences. In September 2018, for example, People reported that Rose and Khalifa had come under heavy criticism after sharing photos and videos of Sebastian waiting for the school bus on his first day of kindergarten. According to the magazine, many fans were angry that a couple as wealthy as they are would put their son on a bus.

"All ya'll people asking why I would let my son ride the bus cause I'm rich," Khalifa said in a video shared by The Shade Room on Instagram. "Being rich don't got nothing to do with a child's experiences. He said he wanted to ride the bus with his friends, so let kids do what they want to do. Chill."

Whether he's known on the ball field as a famous rapper or just a dad, it seems like Khalifa's coaching is paying off. In September, Rose took to her own official Instagram account to reveal that Sebastian's team had won their first baseball game. "My Pumpkin is getting so big!" she wrote in a post featuring a photo and two videos of Sebastian at the game. "He won his first Baseball game today."