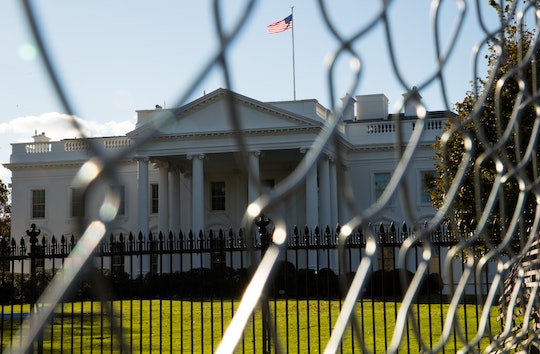 If you're looking for a heartfelt story about determination, hard work, and persistence, this probably isn't it. But, if you're looking for a bit of lighthearted news with which to end your Sunday, you've come to the right place. Because today, you probably need a break from all the heavy news that's been flooding your feed all week. And in the midst of it all, you might have missed this gem: that a woman arrested at the White House was trying to scale the fence, and it wasn't the first time she had done so, either.

Yes, folks, that's right. Marci Anderson Wahl, 38, was arrested early Sunday morning after she allegedly attempted to climb the fence outside the White House, at "the southeast corner of the Treasury building," according to The Hill. But, this wasn't the first time Wahl was allegedly caught trying to sneak onto White House grounds, oh no. This wasn't even the first time this month she attempted to breach security. Wahl was also arrested last Tuesday night for allegedly scaling the fence, and again on Friday, for "contempt of court." And while this breach of security may sound alarming, police claim that no weapons were recovered from Wahl or her belongings.

In case three arrests in six days confuses you (and let's face it, it's pretty confusing), let me break it down for you.

Wahl was first arrested Tuesday night, at around 10:30 p.m., when she allegedly attempted to climb the fence near E Street. However, "Secret Service confirmed she was suspended in the air on the inside of the fence. A police report stated Wahl's shoelaces became entangled, forcing her upside-down." After she was caught, she reportedly told officers that she wanted to "speak with President Donald Trump."

Next, Wahl was taken to court where she was soon released after being given an order to "stay away" from White House grounds. But, she wasn't giving up that easily. Friday, security personnel found Wahl around Lafayette Park, across the street from the White House. Again, she was arrested and charged with "contempt of Court in violation of a stay away order." She was instructed to return to court April 27.

But, because she just refuses to give up, Wahl once again allegedly attempted to climb a fence outside the White House. She "was arrested after an alarm sounded about 2:15 a.m. Sunday" and, according to Fox News, officials claimed she was attempting to "[scale] a fence at the Treasury Building, next to the White House."

So, I suppose, maybe this is a story of determination and perseverance. Marci Anderson Wahl clearly has something to discuss with Mr. Trump, and she isn't giving up. Whether she tries again in the future or not, at least she's got an interesting story to tell.