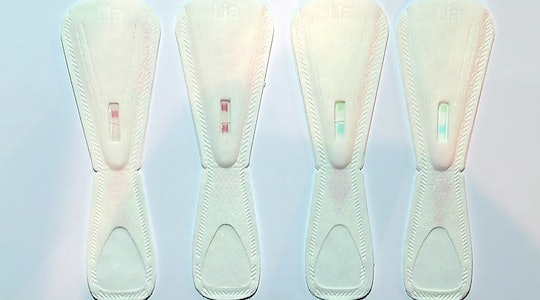 Home pregnancy tests can be a bit of a pain. Aside from trying not to pee on your hand, they take up space in the trashcan, they cost a pretty penny, and the hunks of plastic are far from eco-friendly. Those annoyances might soon be a thing of the past, now that women can use this flushable pregnancy test and make the whole process a little bit easier. As an added bonus, the awkwardness that comes with burying a used test in a tiny bathroom trashcan will be a non-issue anymore. Simply use, flush, and carry on with your day.

Lia, the world's first flushable pregnancy test, is the family planning tool everyone has been waiting for. This new test is a treasure for women who want to keep their reproductive business to themselves, as well as the environmentally conscious. There is also a substantially less ick-factor involved in the process without having pee sticks hanging out in the trash.

The design for Lia was presented on Monday at a start-up competition called TechCrunch Disrupt Berlin. Lia was a hit at the annual competition, coming in first place and beating the other presentations. At the competition, the brains behind Lia, Bethany Edwards and Anna Simpson, explained in their presentation that they were looking to improve upon the standard pregnancy test stick, which has had little change in design over three decades, according to TechCrunch.

"It's been the same stick test since 1987, and that's kind of crazy," Edwards said, according to TechCrunch. "Single-use diagnostics [pregnancy tests] are only used for a couple of minutes, and they're all made out of plastic and non-sustainable materials."

But it isn't the just the materials that Edwards takes an issue with. On Tuesday before a panel of judges she expanded on the topic, according to Philly Mag:

The at-home pregnancy test is still the same stiff plastic relic highlighted in movies for its lack of privacy. Someone finds the test in the trash and breaks the news before you can. Worse yet, they’re bulky, expensive and add over 2 million pounds of plastic to landfills every year.

All of those pregnancy tests sent off to landfills were more than Edwards and Simpson could bear. In an effort to lessen the impact, Lia is made with a special paper that comes apart in water and then biodegrades, allowing the tests to be flushed like toilet paper. The process is the same as a normal home test, so come hydrated. But the original design is improved upon by a wider collection area — keeping you from missing or peeing on your hand — and the fact that you can flush it away when you have your results. Speaking of results, the test area is coated so that the biodegrading process doesn't start until you drop the test in the water.

The biodegradable paper isn't the only eco-friendly aspect of Lia. Simpson explained on stage that:

Lia is made with zero glass fibers, batteries, batteries plastic, or nitrocellulose— elements founds in nearly all single-use diagnostics available on the market today.

Along with helping the environment, Lia is more than 99 percent accurate when used on the first day of a missed period, according to Philly Mag. Recently FDA approved for over-the-counter sale, it should be available for purchase on Amazon by mid-2018 and then in stores as well. The projected cost is between $9 and $22.

Edwards and Simpson are also looking to give back to other women. Via the Lia website, visitors can donate a test for $10 to partner organizations such as Planned Parenthood, Whitman-Walker Health and PreserveFertility.org. Designed to be discreet, sanitary, and flushable, this may just be the pregnancy test of the future. What a time to be alive.