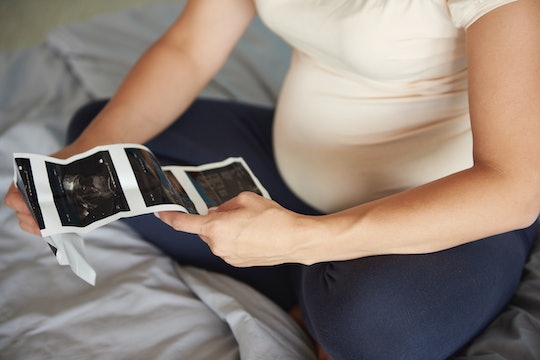 Woman Carrying Twins Finds Out She Has 2 Uteruses

While learning of a pregnancy can often be a pleasant surprise, a mom-to-be in the United Kingdom received an additional shock from her doctors. A woman carrying twins found out she has two uteruses, a condition called uterus didelphys, with one twin in each uterus. (As if twins weren't enough of a shock.)

Although a relatively rare condition, uterus didelphys, or double uterus as it is sometimes called, is considered a congenital abnormality that can increase the risk of miscarriage or premature birth. For 28-year-old Kelly Fairhurst, the condition has resulted in a rather unique pregnancy, according to Insider: Fairhurst is carrying twins, one in each of her uteruses, and could go into labor twice.

While doctors aren't sure what causes uterus didelphys, they know it occurs in utero. As the Mayo Clinic explained the condition, the uterus starts out as two small tubes in female fetuses. As the fetus develops, these tubes generally join together to create the larger, hollow organ we know as the uterus. For those with uterus didelphys, however, the tubes don't fully join, resulting in two separate uterus structure with two separate cervixes and, sometimes, two vaginas.

The condition is incredibly rare. Asma Khalil, a professor of obstetrics and maternal-fetal medicine at St. George's University Hospital in London, told The Sun only one in 3,000 women are estimated to have uterus didelphys worldwide. What's more, the probability of a pregnancy like Fairhurst's — where a twin is carried in each uterus — is even rarer.

"About one in 25,000 women with uterus didelphys gets pregnant with twins, one to each uterus," Robert Zurawin, an associate professor of obstetrics and gynecology at Baylor College of Medicine in Houston, told Scientific American, placing the odds of such a pregnancy at roughly one in 50 million.

Per the Mayo Clinic, uterus didelphys often results in no symptoms, making it hard to diagnose outside of a pelvic exam or imaging tests such as an ultrasound or MRI. For many, the condition has little impact on their life as they lead regular sex lives and experience normal pregnancies and births. In fact, the Mayo Clinic noted that "treatment is rarely needed" for those who don't have signs or symptoms of greater problems. Additionally, those with uterus didelphys who are also found to have a double vagina can have an operation to remove the wall separating the two vaginas to allow for easier childbirth.

In some instances, however, uterus didelphys can increase a person's risk of infertility, miscarriage, and premature birth, according to Cosmopolitan. Still, doctors stress that many people with uterus didelphys have successful pregnancies and deliver healthy babies. And that's what Fairhurst and her doctors are hoping for.

"The plan is to have them both by c-section," Fairhurst told The Sun. "My last two births have been so quick there’s a risk that might not be possible. In all honesty, the whole thing is pretty crazy."