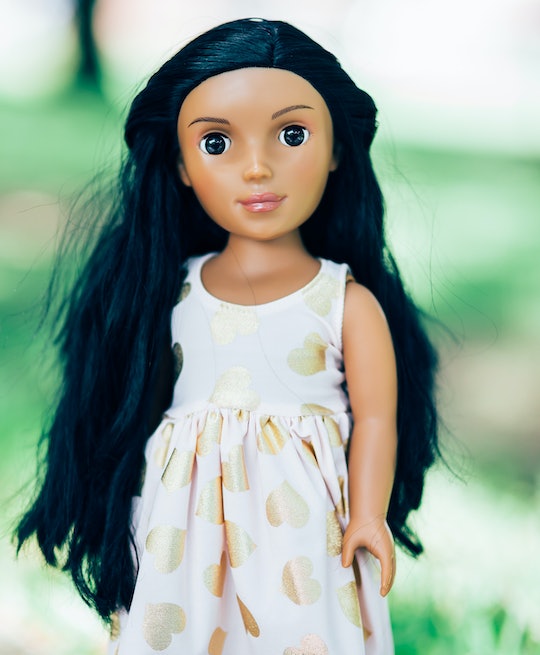 Woman Creates Diverse Dolls She Said She Never Had, & It's So Important For Young Girls

When you're mixed-race, you tend to feel like you don't see yourself represented in the media. I know this, because as a black and Hispanic child growing up, I was constantly looking for someone who looked like me on television, or a doll that reminded me of myself. And at least one other person can relate to me: Neha Chauhan Woodward, who created the Willowbrook Girls. Woodward creates the diverse dolls she never had growing up, and it's filling a very important gap for little girls everywhere.

Earlier this year, two Willowbrook Girls dolls were released — and one of them is Anjali, who is Indian-American, like her creator. “I never had an Indian doll growing up,” Woodward told The Huffington Post.

America is becoming more diverse than ever, and almost half of multiracial Americans are under the age of 18, according to Pew Research. Finding a toy who looks like you when you're Korean or Colombian shouldn't be tough in 2016, but somehow it is. Major toy manufacturers have only recently hopped on board with representing different demographics, including creating a plus-size Barbie doll. Having a more diverse selection of dolls also encourages people to buy them:

Woodward told The Huffington Post after visiting a toy store when she was a student at the Stanford Graduate School of Business that she realized today's selection of dolls still lacks diversity.

I feel like a lot of industries have had their renaissance over the years ... and I assumed that the toy industry had done the same. [I was] really surprised that nothing had changed.

Several of the seven Willowbrook Girls are Asian, black, and Latina characters.

Besides Anjali, the other Willowbrook Girl that has been made into a doll so far is Cara Morales-Burch, who is half-Latina.

Woodward's line is also important because her dolls, who come with kits that include background stories, are intelligent and goal-oriented, according to Girls & Co.'s website. Woodward added that girls' toys, especially dolls, tend to place most value on appearance. “We were smart and ambitious and we had big, beautiful dreams,” Woodward said in an interview with Women Who Work. “That side of us wasn’t reflected in the toys we played with.”

Representing girls who are interested in STEM is definitely a great idea because of how much girls are discouraged from going into STEM as the result of sexism and gender expectations from both teachers and parents. Woodward emphasized how important the creation of a new line of dolls is to a new generation of girls in an interview with Her Campus:

Girls today are amazing. They are smart, ambitious and opinionated and I want to empower young girls by giving them toys of characters that can finally resonate with them, that can attempt to live up to how amazing our girls are.

The dolls are $88, and can be purchased on the Girls & Co. website, as well as on Amazon. The dolls include a book, stickers, and a bracelet, and a portion of sales goes to She's The First, which supports girls’ education.

It'd be amazing if the line can make it into stores one day. Imagine how much a 6-year-old girl's face would light up when she walks into the toy store and gets excited because she's found a doll who looks like her. It's such a simple thing, but it means a lot, especially when you're so young. I would know.