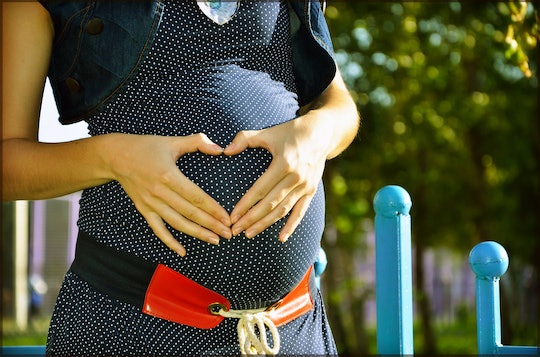 Many expectant mothers make birth plans. I mean, moms-to-be have a lot of things to consider: everything from who you want in the room during birth and how you want to labor (sitting, squatting, standing, or lying down) to pain medications. And then there's the location. However, babies don’t always adhere to “the plan.” In fact, one Florida woman’s birth plan went out the window (the car window, that is) entirely when she gave birth in a hospital parking lot. That’s right, 30-year-old Paula D'Amore gave birth to her daughter in the family car, and photos of the event show that she looked pretty amazing doing it.

D'Amore went into labor last Thursday. After timing her contractions, she made the decision it was time to contact her birth team: a doula, a midwife, and birth photographer, Paulina Splechta — as her plan was to labor at home. But, less than 90 minutes later, D’Amore’s contractions became more intense, so she went upstairs to take a hot bath. D’Amore told local station WPTV she was feeling good after getting in the tub, but things quickly changed and the contractions came every two to three minutes:

I'm in the tub. it's feeling great for about five minutes and then after that I started shaking and the contractions just kept coming back to back. They were like two to three minutes apart at that time.

That’s when the couple and D’Amore’s birth team knew it was time to head to the hospital. Unfortunately, the hospital was 30 minutes away. In an interview with TODAY, D’Amore explained what happened next:

By the time we get two miles down the road from my house, I had the urge to push...and [t]he minute we pull[ed] up to the fire lane on the side of the hospital where the maternity wing is, is when I felt a burning sensation and I knew I'm crowning.

D'Amore's husband, Joseph, raced into the hospital to get help, he told WPTV:

I ran in and told security that I needed help now; my wife's in labor. I ran back out to the truck open the door and there was my baby crowning.

But when he returned it was time for D'Amore to deliver. So D’Amore’s doula instructed Joseph how to support the baby's head and, two pushes later, Daniella D'Amore arrived (weighing in at 8 pounds, 6 ounces).

When asked about the experience, D'Amore told TODAY: "I never thought when I was pushing that the baby would come in the car... it's incredible. Birth is so beautiful." To see all of the beautiful photos (where D'Amore just looks like she's casually giving birth — no forehead sweat or anything), check out TODAY's story.