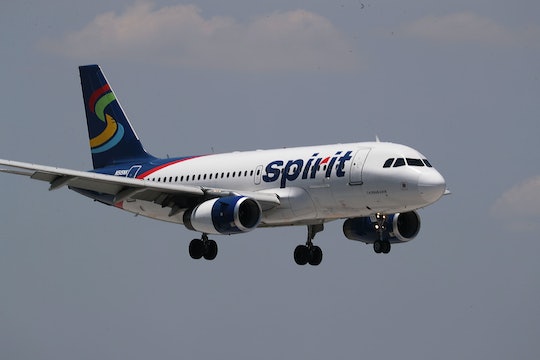 Most expectant moms wouldn't think of hopping on board an airplane in their last trimester. But one Phoenix, Arizona, woman gave birth onboard a Spirit Airlines flight midair, where her son's early birth caught everyone by surprise — her most of all. On Saturday, Cristina Penton was on board Spirit Airlines flight 971 with her 11- and 12-year-old children, scheduled to fly from Fort Lauderdale, Florida, to Dallas, Texas. At 36-weeks pregnant and having carried both of her other children to term, Penton thought she had plenty of time to safely travel by plane. But her baby had other plans.

According to CNN, Penton felt something was "off" from the moment the plane took off the runway. In a statement, Penton said, "Everything started happening very quickly." Saying her third baby's birth happened "quickly" was an understatement, given that the typical Spirit Airlines flight time between Fort Lauderdale and Dallas is just about two and a half hours, from wheels up to wheels down, according to flight tracking website Flight Aware.

"I didn't think I was having the baby because it was too soon, but after a few minutes I knew I needed medical attention," Penton continued. Once it became clear to her that there was no stopping the arrival of her son, she was in "pure panic." Thankfully for Penton, both a nurse and pediatrician were on board the plane, and were able to help her safely deliver her baby while the plane diverted to New Orleans, Louisiana.

Rhondula Green, a registered nurse from Carrollton, Texas, told CBS DFW News about the incredible moment Penton's son was born: "He just popped out — literally. So, we just kind of like caught him." During Penton's surprise labor and delivery on board the flight, she was given plenty of damp towels and bottles of water — all free of charge.

Spirit spokesperson Paul Berry said in a statement that Spirit "flight attendants are trained to handle medical emergencies in flight and they have access to doctors on the ground via inflight communication." Penton also added that, despite her initial panic, "the Spirit crew was very attentive and took care of me throughout the flight. They helped make what could have been a terrible situation as good as it could possibly be." According to Spirit Airlines, baby Christoph Lezcano was born weighing 7 pounds and measuring 19.5 inches.

As Berry noted, "A baby being born during a flight is very rare." While there is no central database of inflight birth statistics, the American Congress of Obstetricians and Gynecologists noted that air travel during pregnancy is generally safe for expectant moms, barring any "medical or obstetric conditions that may be exacerbated by flight or that could require emergency care." ACOG also states that most commercial airlines allow women who are up to 36 weeks pregnant to fly, but that pregnant passengers should always check with the airline first in case of specific gestational limits.

In all, having a baby on board for Penton and her family turned out to be one hell of a birth story. Even better? Spirit Airlines announced Baby Christoph has earned himself — and a guest of his choice — a free flight on his birthday for every year until he turns 21.