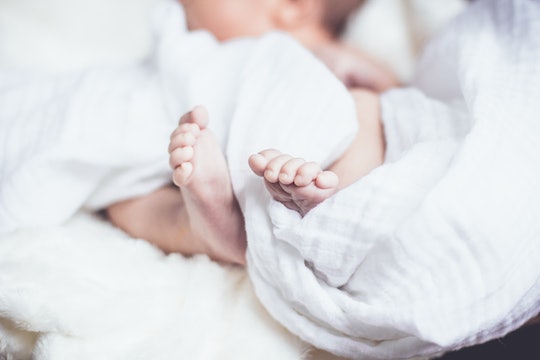 Conceiving can be hard. Between tracking ovulation cycles and hoping your period doesn't come, conceiving can place significant stress on women and their families. According to Baby Center, 80 percent of women get pregnant within six months of trying to conceive — and it can definitely take its toll on women. Luckily, one woman on Reddit has found a way to cope with this stress — through musical theater. On Reddit, a woman rewrote Hamilton about a friend's efforts to conceive, and I wish someone would produce a musical about it — because it's that good.

It all started out so innocently — a user in the TrollXOver30 subreddit posted an incredibly relevant Hamilton GIF in regards to another user's ovulation and trying to have sex with her husband. But what stemmed from one little GIF came the most amazing and incredible Broadway song about ovulation written by one Reddit user that's good enough to be produced into a Broadway musical itself. Because what isn't more dramatic than the saga and journey that it takes to conceive a child? Throw in some choreography and nice costumes that are not three day old sweatpants and you've got a killer Tony award winning show. Hamilton, who?

The updated verse about ovulation to the song "My Shot" from the musical can be read in full here, written by the Reddit user who asked Romper to remove her name for privacy purposes:

I'mma get up on this ovulation,

I probably shouldn't brag, but it feels amazin',

The problem is I aint got that gestation

Line up my nights to get laid,

I've got a womb with a view a happy little nest

Waitin' for a guest, my eggs as yet: unreachable

Been tryin' real hard to have a baby

These schedules are makin me crazy but maybe

Every mucus check, every temperature rise

I have learned to surmise. I want to try some mating,

The plan is to get this belly to swell,

We are the newest, prospective, family

And that is, what we are, meant to be.

A family that I want desperately,

Essentially, I got the recipe,

But my systems not working too reliably

We need to start making whoopie with immediacy,

So let's hop to the bedroom immediately.

ENTER ME! (She says with alacrity)

Don't be shocked, go on, and take some Vitamin C,

And I am not throwin' away my shot!

Get out your salami, cause I wanna be a mommy,

And I am not throwing away my shot!

The rap perfectly captures so many of frustrations and moments women experience while trying to conceive. From references about monitoring cervical mucus and checking basal body temperature to references about men taking Vitamin C to aid in conception, this rap covers every single base when it comes to the conception process.

While conception can feel a little taxing, the eventual outcome is so completely rewarding. While it might be hard to keep track of every little factor that goes into having a baby, the motivation behind the tracking is what keeps the dream alive. Ovulation is an aspiring mom's one shot to get things right and conceive before the cycle starts again — their one time to get it right — and most women are not going to throw away that time.

The rap encapsulates all of the hardships but serves as motivation to keep going — don't throw away that shot.