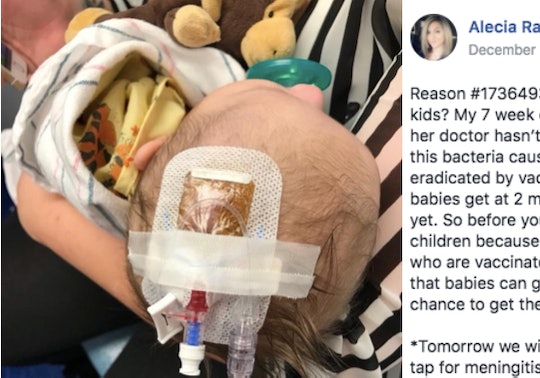 Despite the fact that the American Academy of Pediatrics (AAP) recommends a set schedule of vaccinations — and the majority of school systems also require kids to be up-to-date on these shots — many parents still choose to leave their children unvaccinated. What these anti-vax caregivers might not understand is this decision not only affects their kids, but it can also impact others who are too young to be fully vaccinated. That's appears to be exactly what happened to one infant who wound up with a rare and dangerous bacterial infection. And this heartbreaking photo of a 7-week-old with Hib flu, shared by her aunt, shows just how important vaccinating really is.

Earlier this month, Alecia Rankin of Tennessee shared a photo of her niece in the hospital with Hib flu, as she noted in a Facebook post. Contrary to what its name suggests, Hib flu isn't actually a type of "flu" at all; according to the Centers for Disease Control and Prevention (CDC), it's a type of bacteria that causes infection, and the most common types can be prevented with a vaccine.

"Reason #1736493983283763 to vaccinate your kids? My 7 week old niece has HIB flu," Rankin, the aunt on a mission, wrote on Facebook. "So rare that her doctor hasn’t seen it in her career because this bacteria caused by HIB flu was all but eradicated by vaccines. The first being the one babies get at 2 months, which she hasn’t gotten yet." Rankin continued:

So before you decide not to vaccinate your children because "it’s your choice" and "those who are vaccinated won’t be affected" remember that babies can get sick before they have the chance to get their vaccine.

According to the CDC, the Hib bacteria can cause infections in people of all ages and symptoms range from mild (like an ear infection) to severe (like a life-threatening bloodstream infection.) But one of the most vulnerable groups? Babies and young children. For the best protection, children should get four doses of the Hib vaccine, according to the CDC. The recommended schedule is at 2 months, 4 months, 6 months and 12-15 months. Obviously, Rankin's niece was too young to even get her first dose.

Enter: The concept of herd immunity. According to the U.S. Department of Human & Health Services, herd immunity is achieved when a "critical portion of a community is immunized against a contagious disease, most members of the community are protected" because there is little opportunity for an outbreak. So even those who can't get certain vaccines (like Rankin's niece, who was too young, or pregnant women, or those with a compromised immune system) end up getting some protection because the spread of contagious disease is contained.

Rankin shared a couple of updates on her original Facebook post, which has managed to attract more than 7,000 likes and over 13,000 shares so far. In these updates, the aunt explained that the baby girl had to have a spinal tap to test for meningitis and then announced she was able to go home and is now doing well.

"I shared the photo and post because I fully believe in vaccinations," Rankin tells Romper. "And watching my baby niece so sick from a vaccine-preventable disease further solidified my belief. There are risks with any kind of medication or vaccination, but science and research have proven that the benefits far outweigh the risks." Rankin added:

If my child were unable to get vaccinated due to an allergy or adverse reaction, I would be even more pro-vaccine because he would depend on herd immunity to help keep him healthy.

As a new mom, I quickly realized that much of parenting involves on-the-job training. (As we all know, everyone is the perfect parent before actually having kids.) One decision I have always been 100 percent confident in, even before giving birth, was vaccinating. But it's unfortunate that defenseless babies are still exposed to vaccine-preventable diseases in part because a vocal minority believes vaccinations are useless or may cause serious harm. I hope Rankin's niece makes a full recovery — and that parents who may be considering holding off on vaccinations for their own kids give them a second thought.