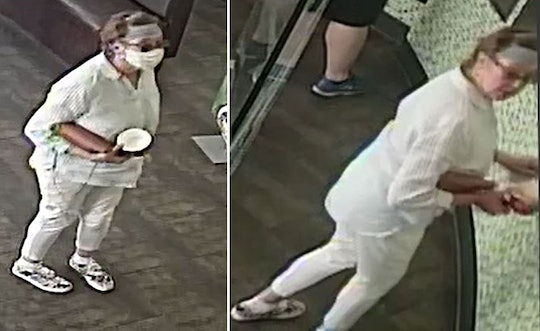 Police in San Jose, California, are looking to identify a woman alleged to have intentionally coughed on a baby after arguing with the child's mother about proper social distancing amid the coronavirus pandemic. Video of the incident, which happened inside a popular frozen yogurt restaurant, showed the woman approach a 1-year-old sitting in a stroller, remove her face mask, and cough multiple times over the child. The boy's mother has said the attack was deliberate and potentially race related.

"Coughing on someone's face. She did it on purpose," Mireya Mora told local ABC News station KGO. "It's not like she did it on accident, 'oh cough, cough.' No, she purposely coughed on my son's face."

According to the San Jose Police Department, the incident happened at a Yogurtland in South San Jose on Friday, June 12 at roughly 5:25 p.m. Police have said Mora was standing in line with her son in a stroller behind a white woman in her 60s when the woman became upset and accused Mora of not maintaining proper social distancing.

Video footage captured on surveillance cameras and released by police showed the woman walk closer to Mora and her stroller, remove her face mask, and cough over the 1-year-old two or three times. "It happened so quick I was in shock," Mora told ABC News. "She got close, she took off her mask, and she coughed three times super hard on my son's face."

Police have said they're treating the incident to be an assault and are seeking any information that might help them identify the woman. "The San Jose Police Department is asking for the public's assistance in identifying an assault suspect," police noted in a recent press release.

While the verbal argument between Mora and the woman was about maintaining proper social distancing, Mora told local news outlets she believes the incident may have been race related as it occurred shortly after Mora spoke to her grandma in Spanish. Both Mora and her grandmother are Hispanic. Additionally, Mora told NBC News the woman accused her of not being able to understand English. "She said, 'so you don't understand,' and 'do you even understand what I'm saying,' like I'm not even speaking English," Mora told the news outlet.

Whatever motivated the incident, Mora said she was upset someone would attempt to take their aggression out on an innocent child. "I can't believe that someone has the heart to do this — and why? My child did nothing wrong," she told NBC News. "My son should not have had to experience this, being a baby, so young."